Christchurch Airport has never lost sight of its sustainability goals and is now arguably the greenest gateway on the planet, writes Joe Bates.

Christchurch Airport has set a new sustainability milestone by going beyond being carbon neutral and becoming climate positive.

Its general manager for planning and sustainability, Nick Flack, believes the move is an important step in the transition of airports and aviation to a lower carbon future.

“Achieving this next level in our journey is critically important because airports and aviation support economic activities that earn the most export dollars per tonne of carbon and support improved wellbeing for future generations,” enthuses Flack.

Christchurch Airport has had its greenhouse gas (GHG) footprint independently measured and audited since 2006.

Taking immediate action to reduce Scope 1 (onsite operational) emissions was the first step and has resulted in close to a 90% reduction in Scope 1 emissions to date.

This, explains Flack, is 14 years ahead of where the airport’s science-based targets pathway requires them to be.

The airport was recognised as world leading in airport decarbonisation late 2020, when it became the first gateway on the planet to achieve Level 4 status in ACI’s Airport Carbon Accreditation programme.

As a result, it now mentors and collaborates with airports around the world, including Brisbane and Perth in Australia, and New York’s JFK, Newark Liberty and LaGuardia airports in the US, on how to reduce emissions.

“We have an open-source policy in relation to our sustainability work,” says Flack. “There is no future for aviation if we don’t transition to low emissions, and that involves the whole sector. The great thing is the sector is forward looking and collaborative, with a proven history of innovation.”

Flack insists that Christchurch Airport will continue to work on a reducing its emissions, ahead of science-based targets aligned with the Paris Agreement target of limiting global warming to below 1.5 degrees.

“This includes working with airline partners to accelerate the decarbonisation of the aviation sector,” he notes. “Emissions by aircraft while in the air are a big part of the remaining challenge. Airlines and aircraft manufacturers have plans to accelerate the development and deployment of lower-carbon technology.

“As an airport, our focus is to ensure we are leading the development of the necessary infrastructure so we can be early adopters of new technology. New Zealand’s first electric passenger aircraft was launched at Christchurch Airport and leading technological contenders are hydrogen and battery electric power for short-haul aircraft.”

Phase One of the project includes plans for a 220-hectare solar array capable of generating 150 megawatts of energy – enough electricity to power 30,000 homes for a year while providing the same carbon benefits as planting 1.25 million native trees and shrubs.

“We see Kōwhai Park as a step beyond carbon neutrality and a way we can catalyse the low carbon future of the Canterbury region.

“To progress this work, we are working with Hamburg International Airport. We view Hamburg as the European leader in applying hydrogen within airport operations, working with Airbus to assist the transition of aviation to more sustainable energy.

“The two airports now work together with regular meetings in the wee small hours to combine our knowledge and accelerate adaptation.”

What’s more, Flack insists that his gateway is not stopping there, noting that in addition to this work, operator Christchurch International Airport Limited (CIAL), is voluntarily supporting permanent New Zealand native forestry restoration that removes GHG emissions from the atmosphere.

He says: “We have followed best practice as set out by the Ministry for the Environment’s ‘Interim Guidance for voluntary climate change mitigation’.

“It means that before making claims of voluntary climate change mitigation, organisations should first measure their emissions, commit to an emissions reductions plan, and continue to take action to reduce their emissions in accordance with the plan.

“Our ambition is to go beyond ‘neutral’. We want to have a positive net benefit on our environment, so we are aiming at removing 125% of our remaining emissions. We achieved 90% reductions in our Scope 1 emissions, but at the moment, there is no technology available to reduce the final 10%.

“So, we are investing in New Zealand based permanent native forestry restoration to remove carbon from our atmosphere beyond our own footprint. This will also actively assist biodiversity, habitat restoration, landscape resilience improvements, soil health and water quality.” 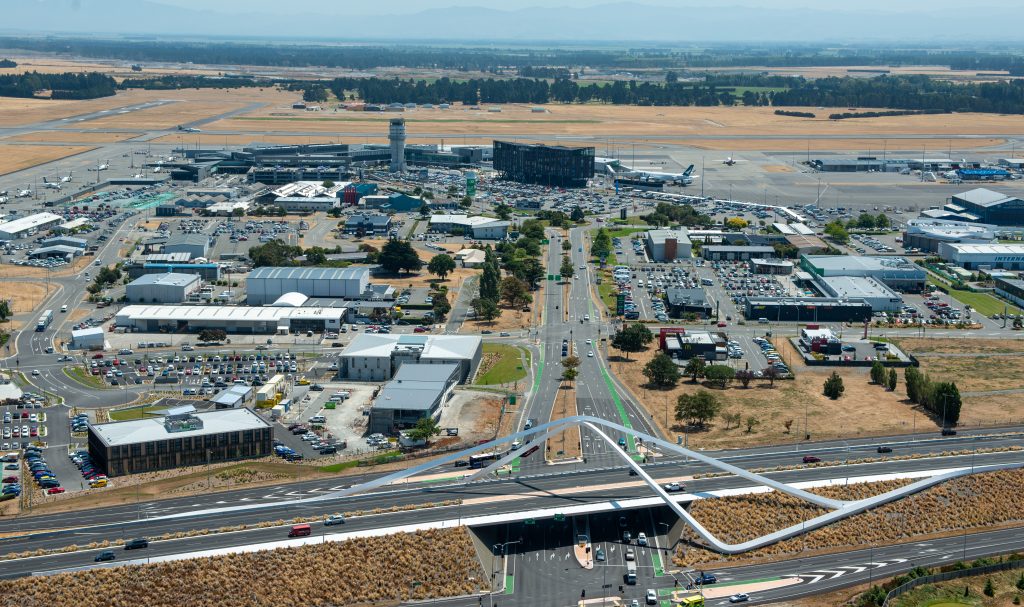 And it seems that the airport’s sustainability drive also extends to its funding, as in late December 2021, CIAL successfully completed the re-financing of an existing debt facility with Westpac, at the same time converting it into its first sustainability linked loan.

“This is not a new loan, but the first step in CIAL taking the opportunity to incorporate its ambitious sustainability targets into its financial strategy, with conversion of other existing facilities considered as they mature over time,” says May.

“This is another way Christchurch Airport is demonstrating a sincere commitment to sustainability. Rather than just rolling over some maturing facilities on the same terms, we’re putting our money where our mouth is.”

The Sustainability Linked Loan means the financial terms of the Westpac loan are linked to whether the airport achieves its ambitious goals for carbon reduction, renewable energy generation on its campus and energy efficiency.

The airport’s progress will be subject to independent scrutiny and, if it achieves its targets, it will receive lower funding costs in respect to this facility. If it doesn’t, this facility will be charged at a higher interest rate.

“Yes, they may be ambitious, but we back ourselves to achieve our agreed SLL targets – alongside the many goals we’ve set and achievements we’ve made in sustainability,” says May. “That includes being the first airport in the world to achieve the highest level of carbon reduction for an airport.

“We know many stakeholders are becoming increasingly interested in companies demonstrating commitment to sustainable outcomes. Converting this facility with Westpac allows us to join several other leading businesses who’ve already shown their focus on championing sustainable finance practices in New Zealand.

“Our airport team daily demonstrates best practice in sustainability, so has made it possible for us to commit to this refinancing. Every member of our team has an impact on sustainability outcomes. That has given our finance team the confidence to sign up to the Sustainability Linked Loan, and we’d like to thank Westpac for their support of this re-finance move.” 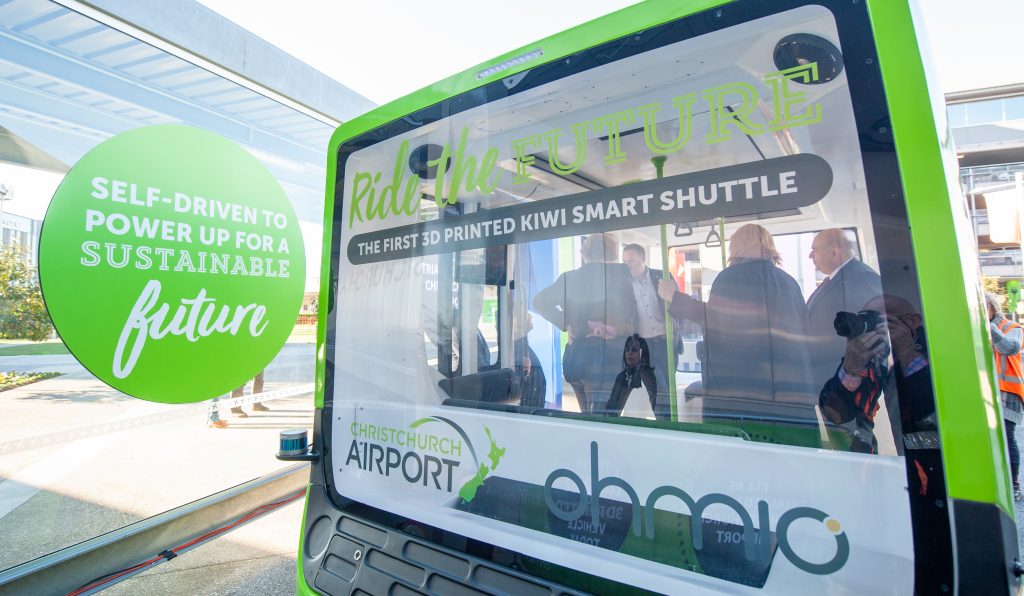 Prior to the global pandemic, Christchurch Airport was handling close to seven million passengers per annum as 12 airlines operated non-stop services to 16 domestic, four trans-Tasman and six international destinations.

However, New Zealand’s border closures in support of some of the world’s toughest COVID related travel restrictions means that international travel has basically been off of the agenda for the past two years.

While admitting that there is still a long way to go until normal services are resumed, the airport’s chief aeronautical and commercial officer, Justin Watson, has no doubt that the gradual re-opening of New Zealand’s borders in 2022 will ensure a better year for Christchurch.

Indeed, he notes that airline bookings have been growing steadily since the government started a slow, phased re-opening of New Zealand’s borders earlier this year.

“We are more than ready to welcome the increasing numbers we are already seeing arriving here,” enthuses Watson.

“As international borders re-open to passengers, we have seen our airline partners such as Air New Zealand, Qantas, Fiji Airways and Singapore Airlines reinstate or increase their services to the key international destinations of Sydney, Melbourne, Brisbane, Nandi and Singapore.

“In addition, we are encouraged by conversations with our other airline partners about resuming their flights in time for our summer peak. Re-starting air services can’t happen overnight, and airlines will take some time to get their crew and aircraft back into service.” 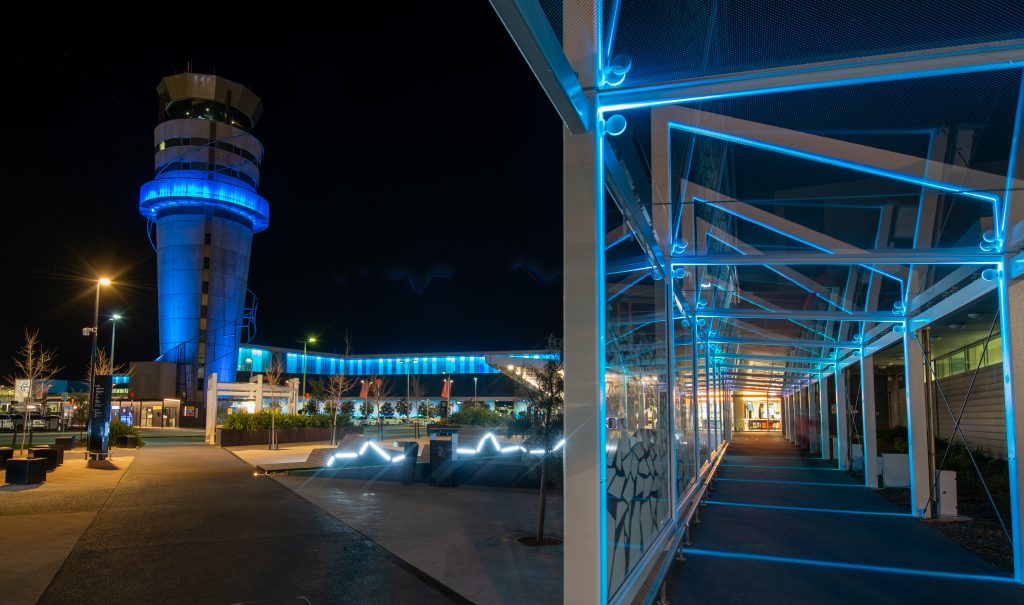 With the global pandemic still making it almost impossible for airports to accurately project future traffic growth, Christchurch Airport has, for now, decided to focus on three ‘mega-trends’ going forward.

Nevertheless, Watson believes that it is time to look beyond the pandemic to the world we will operate and live in over the next decade or two.

He says: “There are three big trends which have accelerated during the past two years and will shape the future. They are climate change, digital transformation and the future of work.

“All three trends require us to understand their impact on our business and our surroundings.”

Controversial to some, CIAL has revealed interest in building a new Central Otago Airport at some point in the future to ensure that Christchurch and the South Island don’t become a victim of their success and run out of capacity to meet demand.

It insists that in line with its sustainability goals, if it happens, on land it has already purchased, Central Otago wouldn’t be just any airport as it would be built to the highest sustainable standards and enable decarbonised aviation.

Indeed, CIAL feels that it could be an exemplar of the more environmentally friendly airports of tomorrow.

Project director, Michael Singleton, has previously gone on record as saying that a potential site identified in Tarras could support a single runway airport capable of handling both domestic and international short-haul traffic.

“A single 2.2 kilometre runway would be able to serve all of New Zealand’s domestic routes and some short-haul international destinations such as Australia and parts of the Pacific,” he says.

“In general, a longer runway creates more opportunity for the region it serves because it enables businesses and people to connect with more destinations. Our job is to think long-term and identify what opportunities this site could deliver well into the future.”