We pay tribute to the 2018 Airport Service Quality (ASQ) customer experience award winners and talk to some of the CEOs of the successful gateways.

It’s official, Beijing Capital, Delhi-Indira Gandhi, Mumbai-Chhatrapati Shivaji, Singapore Changi, Shanghai Pudong and Seoul–Gimpo are some of the best airports in the world for the delivery of customer service.

The latter award, based on ASQ’s new Arrivals Survey, means that the Indian gateway becomes the first airport in the world to win both a Departures and an Arrivals award.

He says: “Our airport is on the cusp of tremendous development and we will continue to ensure our passengers have a superlative experience.”

The new format of the awards, which recognise the airports around the world delivering the best customer experience in the opinion of their own passengers, means that more gateways than ever before are lauded for their customer service focused efforts, facilities and services.

Indeed, a host of airports have won their first ASQ award, including Biju Patnaik in India; Muscat in Oman and Yichang Sanxia in China.

In fact, in the new ‘Best Infrastructure and Facilitation’ section, no fewer than seven Indonesian and eight Chinese airports are recognised in their size category.

In arguably the most fiercely competitive region of them all, passengers were unable to separate Singapore Changi, Shanghai Pudong, Delhi-Indira Gandhi and Mumbai Chhatrapati Shivaji airports for top place in the Over 40mppa category in the By Size and Region Awards.

And many of these airports triumphed again the new global categories for Best Environment and Ambience by Size; Best Customer Service by Size; and Best Infrastructure and Facilitation by Size.

They include Singapore Changi, which in addition to winning the Best by Size and Region Award for Over 40mppa in Asia-Pacific, along with Beijing Capital, is also now officially the best airport in the world in the same size category for Best Environment and Ambience, Best Customer Service and Best Infrastructure and Facilitation.

Videh Kumar Jaipuriar, CEO of Delhi–Indira Gandhi operator, DIAL, says: “The award is testament to the continued improvements in passenger-service that Delhi Airport has witnessed since DIAL took over its operations in 2006.

“Despite robust traffic growth, and ongoing expansion works, we have maintained our high Airport Service Quality ranking. This demonstrates the dedication, hard work and collaboration with our stakeholders.”

Queen Alia in Amman, Jordan, is the best airport in the Middle East in the 5-15 million passengers per annum category, while Muscat International Airport in Oman is the region’s Most Improved gateway.

Talking about Queen Alia’s success, Kjeld Binger, CEO of operator, Airport International Group, enthuses: “Winning this prestigious accolade is a true reflection of our commitment to continuously enhancing the quality of services at Queen Alia and to providing our passengers with a positive travel experience, whether it be through improved facilities, expedited procedures or passenger offerings.”

GROWTH AND INNOVATION
NEWS, OTHER ARTICLES 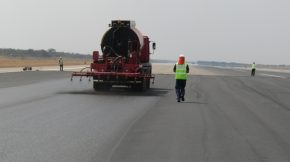