MXD Development Strategists’ Chris LeTourneur outlines what we can expect from Jeddah Airport City and explains why he believes it represents the potential future of airport centric development.

Jeddah Airport City is situated directly adjacent to and connected with the gateway’s 810,000sqm Terminal 1, which is one of the country’s most modern airport facilities, having opened in 2018.

KAIA is the country’s largest and busiest airport, driven by Hajj and Umrah Pilgrims making their journey to the holy cities of Mecca (Makkah) and Medina (Madinah) for worship and culture. Jeddah Airport City provides a refreshing and rewarding experience along this journey.

At the heart of Jeddah Airport City is the Haramain High Speed Rail Station. The Haramain High Speed Rail was opened in 2019 and connects KAIA with Jeddah and Mecca, with a travel time of only 43 minutes between Jeddah and Mecca, at speeds up to 300 km/h. High speed rail also connects KAIA with King Abdullah Economic City to the north, and Medina (Al Madinah Al-Munawarah), with a travel time of 75 minutes from the airport to Medina. It currently carries around 60 million passengers per year.

Jeddah Airport City is part of ‘Kingdom Vision 2030’, a transformative economic and social reform blueprint opening Saudi Arabia to the world. It is envisaged that Jeddah Airport City will play a key role in enhancing the traveller experience and establishing KAIA as a global economic, transit, logistics, tourism and business hub, stimulating regional and national economic growth.

KAIA was developed under the guidance of the Jeddah Airports Company (JEDCO), with approval of the Saudi Arabian General Authority of Aviation (GACA). Jeddah Airport City is part of phase one of JEDCO’s Mega Plan for KAIA, which also involves the planning and development of KAIA’s Cargo City, unlocking the airport’s local and international business opportunities.

Jeddah Airport City has a 44-year land lease with JEDCO, supporting a wide range of land uses and development.

With its broad experience in real estate investments and urban development, SARH is guiding the planning and development of Jeddah Airport City. SARH engaged AE Prime Engineering Consultants from the UAE and its partner, the Madrid Studio of global architectural firm Chapman Taylor, to generate the Mixed-Use Jeddah Airport City Concept Master Plan. JEDCO has approved this master plan.

SARH plans to begin construction of Jeddah Airport City in 2023, with full project completion by 2028. The first phase of construction will be completed in 2026 and will include the parking podium and Lifestyle Centre, which will contain a Shopping District, City Terminal, Creative Offices, University for Culinary Arts and Hospitality, Co-Working Space, Co-Retail Space, Restaurants, Entertainment and a 20,000 seat Arena.

Total investment in Jeddah Airport City is estimated to be $4.5 billion, which will be funded by SARH and its Austria-based partner, AVORIS, using local and international financial models.

Sultan Bin Ali Al Harbi, chairman of SARH, says: “Jeddah Airport City will be Saudi Arabia’s first airport city development in line with His Majesty, Crown Prince Mohammad Bin Salman’s Vision 2030 for the development and transformation of Saudi Arabia, with the support of the Minister of Transport, Saleh bin Nasser Al Jasser. The project involces a 680,000 square metre plot of land directly adjacent to KAIA, the primary gateway to Jeddah and the holy city of Makkah.

“Jeddah Airport City will introduce a variety of uses, building types and amenities to create a 24/7 destination at the juncture of KAIA and Jeddah’s evolving urban area, serving the needs of visitors and locals, while evolving Jeddah as a world class city. The broad range of uses and amenities will generate significant non-aeronautical revenues and financial returns, while improving the competitiveness and branding of KAIA and Jeddah.” 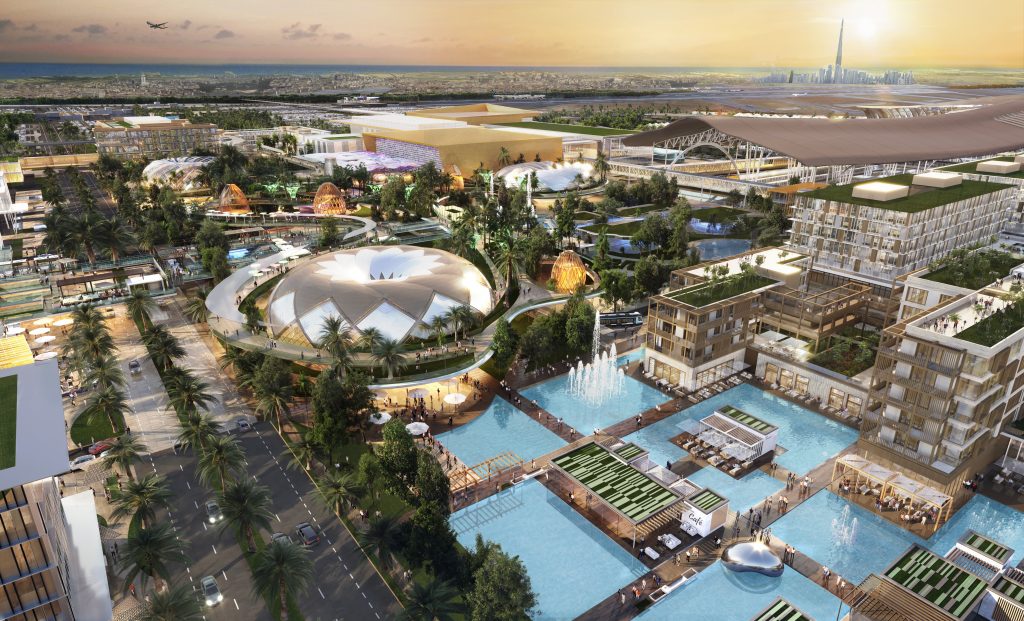 The Jeddah Airport City Concept Master Plan identifies 2,000,000 square metres of built-up area framed on each side of the Haramain High Speed Rail over four quadrants including:

A parking podium employing digital touchless technology and mobile applications will serve the four quadrants, as well as KAIA and the Haramain High Speed Rail Station.

This passive and active open space will incorporate dramatic landscaping, botanical gardens, public art, illumination and digital installations, similar to the famed Gardens by the Bay in Singapore.

Zone 1 also features a 5-Star Luxury Convention Hotel and 3-Star Hotel with a total of 650 rooms, complemented by a food & beverage dining cluster and retail uses. 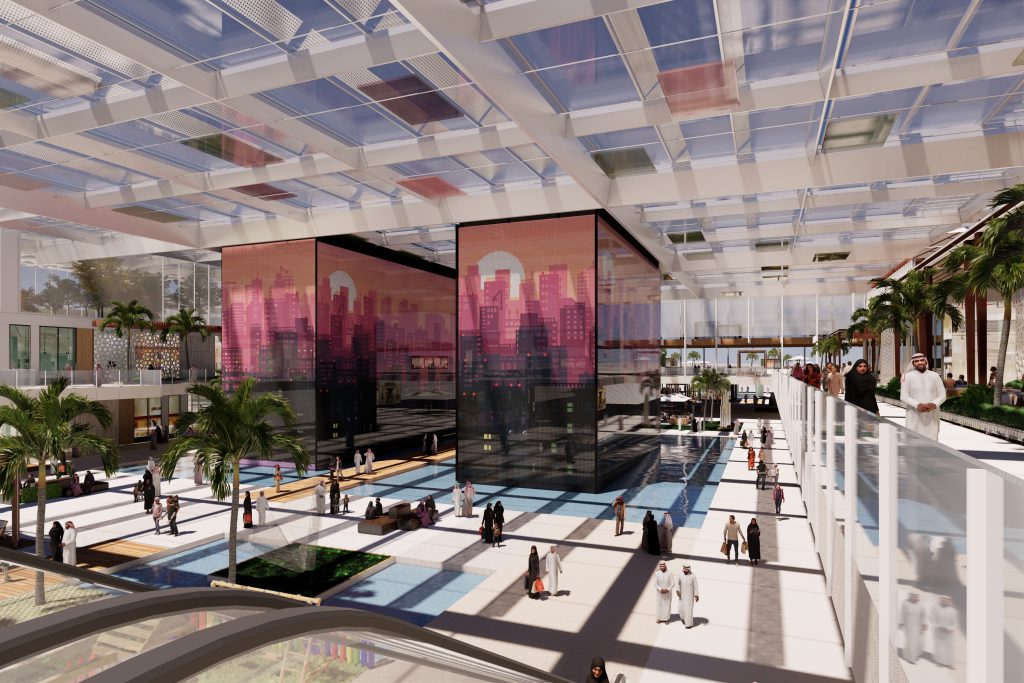 Zone 2 – Business District
The Business District includes 200,000 square metres of offices over two phases in six-floor buildings. This office space will facilitate local and global companies, in sectors ranging from aviation and international trade to finance, innovation and technology.

Additionally, to accommodate the offices, airport employees, airlines and on-site University, a Serviced Apartments complex will offer fully furnished apartments equipped with full kitchens and have services and amenities including a fitness centre, laundry room and recreation room.

Ground floor retail and restaurants will activate the streetscape and provide a strong amenity for the Business District.

In addition, water features will be incorporated into the open spaces and streetscape to provide a cooling ‘canal-like’ waterfront view amenity for the offices, hotels, Serviced Apartments, ground floor restaurants and shops.

A Central Spine holding Zone 3 together and a Festival Plaza will be lined with destination lifestyle retail shops, restaurants, and entertainment. Indoor and outdoor food and beverage experiences are designed within a pedestrian boulevard, as well as in a multi-level dining terrace that works in conjunction with a multiplex cinema and family entertainment centre.

In conjunction with Media and Financial Offices, Co-Working Spaces, Creative Offices and Co-Retail Spaces are situated throughout Zone 3, stimulating innovation and entrepreneurial enterprise.

There are two hotels in Zone 3, including a 4-Star Health Hotel (for hospital staff, patients and families using the Clinic/Hospital and wellness areas) and a 3-Star Themed Family Hotel. 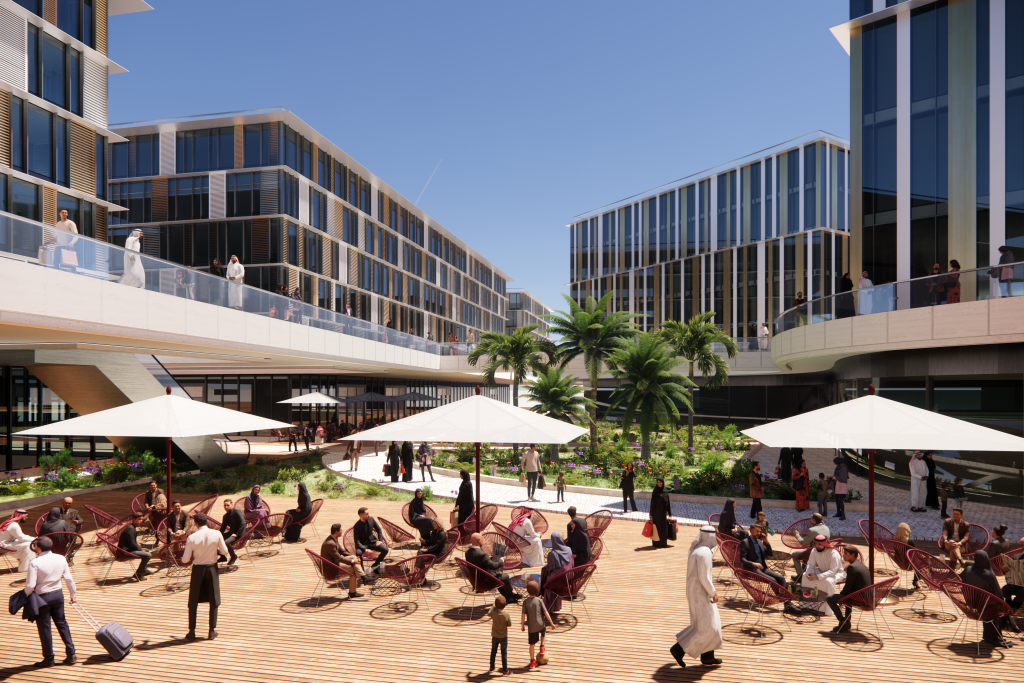 Like the other zones, a sustainable mix of water features and landscaped open space will hold the Calm Community together and provide views from within Zone 4.

Zone 4 will also house the Arabian Museum of Arts & Culture, as well as Universities and innovation hub activities, bringing a level of sophistication and amenity to the nearby residential community.

Office spaces in phase one of the Zone 2 – Business District have attracted interest from major airlines and tourism companies desiring direct connectivity with KAIA.

With this wide range of uses, Jeddah Airport City is setting a new bar for airport city development.

About the Author
Chris LeTourneur is president and CEO of Canada-based MXD Development Strategists.