The organisers are pleased to announce that the ACI 12th Annual Airport Economics & Finance Conference and Exhibition and pre-conference ACI-World Bank Annual Aviation Symposium will now take place on September 22-24.

The events will be hosted Malaysia Airports Holdings Berhad and the event venue, the EQ in Kuala Lumpur, remains unchanged.

The 15th ACI Asia-Pacific Regional Conference & Exhibition has also been rescheduled to September 15-17, 2020. It will take place at the original location of Nara, Japan, with the support of host Kansai Airports.

The events were postponed due to travel restrictions and reduced connectivity as a result of the COVID-19 outbreak, and the priority of the organisers to protect the health and wellbeing of delegates, speakers, exhibitors and team members.

ACI Asia-Pacific is deeply appreciative of the support it has received in making the difficult decisions to postpone these events.

Asia-Pacific and Middle East airport revenues have been under tremendous pressure amidst the impact of the COVID-19 outbreak. As a result of travel bans and direct flight cancellations in response to the outbreak, passenger traffic has dropped severely and substantially decreased air connectivity.

Highlighting one aspect of the impact, ACI Asia-Pacific director general, Stefano Baronci, said: “Many of the hub airports in the Asia-Pacific region are heavily reliant on non-aeronautical revenues, sometimes referred to as commercial revenues.

“These revenues are derived from rental income, car parking and concessions such as duty free. On average, Asia-Pacific airports derive as much as 45% of their revenues from non-aeronautical sources. For some hub airports in the region, non-aeronautical revenues are the principal revenue source. Unfortunately, these airports also find themselves in countries that are at the epicentre of the confirmed cases of the coronavirus.”

ACI Asia-Pacific was recently successful in its efforts to prevent the potential halving of the personal allowance for duty free liquor and cigarettes in India.

In response to the Ministry of Commerce and Industry proposal to reduce people’s personal allowance, ACI Asia-Pacific sent a letter to the Indian government urging it to maintain the existing duty free allowance of two litres of liquor and one carton of cigarettes per passenger.

In the letter to the Minister of Civil Aviation, ACI Asia-Pacific called on he government to reject the proposal, calling it inconsistent with the government’s efforts to incentivise private capital in the public sector, and suggesting that it would damage the growth trajectory of Indian airports and duty free providers.

The letter was swiftly followed up by a press release which was widely reported in the Indian media.

“We urge the authorities to reject this proposal. Duty free operators must be able to count on the expansion of airport infrastructure along with new retail space and a regulatory framework that incentivises the market to grow,” said ACI Asia-Pacific’s director general, Stefano Baronci, in the press release.

Indian airports have tremendous growth potential in terms of duty free and travel retail. Wine and spirits are the top duty free segment in India.

According to ACI’s 2018 World Air Traffic Report, passenger traffic in India will grow by around 6% annually until 2040. Within an unconstrained scenario, it is forecasted that the spending in duty free and travel retail will grow 20% to $2.1 billion in 2022, according to InterVISTAS analysis.

In the Union Budget of India for 2020–2021 presented shortly after ACI Asia-Pacific advocacy efforts, the Finance Minister left the current allowances in place and it is hoped that this situation remains the same for the foreseeable future.

Drone security technology company, DroneShield Limited, has locations in Sydney (Australia), Virginia and Washington DC (USA) and London (UK). In response to the growing use of consumer drones for unethical purposes, and the resulting need for effective counter measures to drone intrusions, DroneShield designs detection and disruption systems that use specialised technology to achieve high levels of precision and sensitivity.

Oshkosh Corporation is a Fortune 500 company with manufacturing operations on four continents. The Fire & Emergency segment of the company is a single-source designer and manufacturer of a broad range of fire apparatus, homeland security vehicles, mobile command, communications vehicles, and airport rescue firefighting vehicles under the Oshkosh, Pierce, and Frontline brands. The regional sales and service office, located in Singapore, covers the Asia-Pacific region (excluding China).

Founded in Germany in 1947, Wanzl offers over 100,000 products, solutions and innovations for airports, retail systems, and logistics industries, among other business areas.

At airports, Wanzl is best known for its baggage trolley management solutions.

Through its extensive international expertise in hardware (up-to-date products) and services (trolley management, valet parking, porter services, UM, etc), Wanzl can assume responsibility for all baggage trolley logistics including cash management, staffing and even marketing of advertising space. In fact, the chances are your airport is already using some of Wanzl’s products!

Preliminary traffic data for last year shows that Asia-Pacific recorded a 3% increase in passenger numbers in 2019, which although still positive, was less than half of the  8.1% growth rate in 2018.

Growth in the Middle East was +3.3%, showing a +0.7% improvement from 2018. The performance of both regions was below the average growth of the past five years.

“Both Asia-Pacific and the Middle East have experienced significant growth over the last five years,” comments ACI Asia-Pacific director general, Stefano Baronci. “The 2019 traffic results indicate a growth contraction. This confirm the concerns related to the negative impact of the US/China trade war, which were boosted by commercial measures that frustrated the economic and social progress of the region”.

Wong said: “Safety through the Global Safety Network Programme represents the ethos of what we are collectively trying to accomplish: a sustainable airport industry, led by a generation of innovating airport professionals.

“I’d like to thank YACL for enhancing operational safety and efficiency at Yangon International Airport. We look forward to your continued dedication, and to collaborating with you and other members in the region. Together, we can meet the ICAO global aviation safety plan objectives and contribute to a safe and efficient air travel system.”

YACL CEO, Ho Chee Tong, said: “Passengers and airline partners in YIA can expect a marked improvement in operational safety and efficiency as we complement our current knowledge and practices in operations systems with the skills acquired from the programme.

“This is part of YACL’s continuous training programme to equip our colleagues for the future development of YIA.” 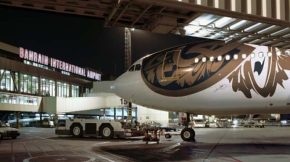