Changi’s vision of the future

Singapore Changi’s new Terminal 4 will provide passengers with a vision of the future in terms of its implementation of self-service facilities, according to operator, Changi Airport Group (CAG).

“Based on current trends, airports of the future will have a suite of self-service options from self service check-in and bag drop all the way through to self boarding gates,” says Jayson Goh, CAG’s managing director, airport operations management.

“This trend is in line with a wider global push towards self-service options at airports to improve productivity and efficiency, while at the same time providing passengers with greater flexibility and convenience.

“To cite Changi’s new Terminal 4 as an example, when it opens in 2017, passengers can expect a complete suite of self-service and automated options from check-in and bag drop to immigration clearance and boarding.

“For the first time at Changi Airport, facial recognition technology will be introduced at T4, to eliminate the need for manual identity verification by staff and enable the full automation of processing and checks from departure check-in to aircraft boarding.”

Elsewhere on the airport, CAG has awarded a S$1.1 billion contract for the second package of works relating to the development of a three-runway system at Singapore Changi to a joint venture between Hock Lian Seng Infrastructure and Sembcorp Design and Construction.

The airport’s master plan includes provision for a three-runway system by the early 2020s, a target it aims to achieve by extending a former military runway to ensure that it is capable of accommodating larger commercial aircraft.

Yam Kum Weng, CAG’s executive vice president, development (Changi East and Terminal 4), says: “The development of a three-runway system is an important part of Changi Airport’s expansion plans, which will take the Singapore air hub into its next phase of growth.

“The project, which takes place amid ongoing airport operations, is complex and requires meticulous planning and excellent execution across different phases.”

Construction is at an advanced stage on a new helicopter terminal and hangar at Auckland Airport that is expected to cater to the airport’s growing number of affluent and adventure-seeking passengers.

The new facility will be built, owned and managed by local helicopter tour operator Helicopter Me.

“Our international passenger numbers continue to rise, up 8% in the last financial year to just under nine million. This has led to an increase in the number of high-spending tourists wanting to connect quickly to their luxury holiday destinations.

“The new helicopter terminal will also provide international and New Zealand tourists with greater choice when it comes to heading out for a scenic flight, lunch or a wine tour while visiting Auckland.”

Situated just 200 metres from the international terminal, the heliport is believed to be one of the closest such operations to an international airport anywhere in the world.

Christchurch Airport has revealed that its strategy of opening new revenue-boosting commercial developments on the airport site continued in its 2016 financial year when it pumped more than NZ$180 million in new GDP into the local economy.

“We have also continued the development of our bare land to lift revenues, grow shareholder value, increase dividends, and balance risk associated with what can be a dynamic aviation industry,” enthuses David Mackenzie, chairman of operator, Christchurch International Airport Limited (CIAL).

It currently has $168 million of new investment property development underway, which will begin generating additional income in FY17 and FY18.

This includes the South Island Freight Hub, being developed with Freightways and Courier Post; the 240-bed JUCY Snooze pod hostel, the first in New Zealand, due to open October 2016; and the 200 room Novotel Christchurch Airport due to open December 2017.

Unveiled by Bahrain Duty Free, the 60sqm store is located on the main passenger walkway of the departures retail area and, according to its operator, is home to “top toy and confectionery brands, and the range is aimed at the young, and young at heart alike”.

“As this is in a prime location within the terminal it was important for us to ensure that we created something fun and innovative, and we believe that with Candy Cloud we have succeeded,” he says.

He adds that the outlet was a sign of the customer-centric approach adapted by the retailer; and how this opening is the first of many openings scheduled by the retailer for the remainder of 2016.

Bahrain Duty Free is currently refurbishing its 1,500sqm departures outlet at the gateway.

The Airports Authority of India (AAI) and North QLD Airports, which operates Cairns and Mackay airports in Australia, have both made key new appointments in the past few months.

Dr Guruprasad Mohapatra has taken over as chairman of the AAI, moving from the position of Joint Secretary in the Department of Commerce for the Indian government.

While North QLD Airports has named Norris Carter as its new CEO, although he is not expected to take up the position until December.

AAI’s new man at the top has worked extensively in the power sector, urban development and industry.

Carter, currently general manager aeronautical commercial at Auckland Airport, will succeed Kevin Brown who resigned in April to take up the role of chief executive at Perth Airport.

Before joining Auckland Airport, Carter spent 14 years at Qantas where he led strategy, network planning and revenue management for the airline’s international operations, and played a leading role in the growth of its frequent flyer business.

North QLD Board chairman, Ross Rolfe, says: “We are excited by the experience that Norris brings to the role and believe he is the ideal candidate to drive future growth in the business by attracting new services to Cairns and Mackay airports as well as continuing to support our existing customers to grow their businesses.

“We are very much looking forward to working with him to achieve new growth in our business that will benefit the communities we serve.”

Fresh from taking home the title of Global ‘Best Airport Coffee Shop of the Year’ for its store at Brisbane Airport at the 2016 Airport Food & Beverage (FAB) Conference & Awards, ELRA has been awarded a Silver medal for Interior Design at the 2016 Sydney Design Awards + Summit for its new Hudsons Coffee outlet at Sydney Airport.

According to ELRA, the awards recognise the brand’s growing popularity among airport passengers and reinforces its key contribution to the overall growth of the travel retail sector.

ELRA managing director, Adam Summerville, says: “Creating a real sense of place at the Brisbane outlet using local Queensland materials and cleverly utilising such a small space by designing the outlet around the existing clock tower is testament to our commitment to creating concepts that deliver an outstanding F&B product.

“In parallel, the Sydney outlet was a great collaboration with the airport who wanted to see the spirit of Sydney coming through the store.”

Amman’s Queen Alia International Airport is celebrating the completion of the second phase development of its new terminal.

The $214 million expansion project has added 43,513 square-metres to the terminal that has allowed the airport to double its number of gates and effectively raise its capacity to 12 million passengers per annum.

The new capacity, up from 9mppa, will be increased to 16 million in the next expansion phase, which will be triggered by demand.

The new-look terminal now boasts a total of 25 gates, including eight remote stands and 17 contact gates.

And in a bid to ensure that QAIA’s short transit processes and walking distances are maintained despite its increased area, 10 new travellators, 24 escalators and 18 lifts have also been installed in the expansion.

AIG chairman, Faras Al Ramahi, said: “The much-anticipated completion of QAIA’s second expansion phase is an extraordinary milestone, which was made possible thanks to the dedication, hard work and passion of our employees at Airport International Group and QAIA, as well as the unwavering support of the government of Jordan, our shareholders and our partners.” 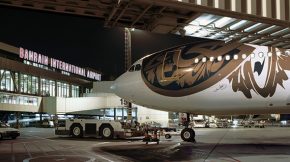 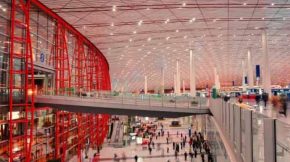 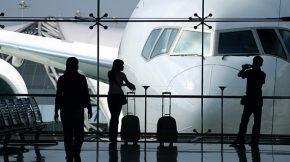 ALL ABOUT DATA
ECONOMICS, NEWS
Made by Aviation Media Ltd. ©All rights reservd.