Bangkok Suvarnabhumi’s general manager, Sirote Duangratana, talks to Joe Bates about plans to expand the airport after a decade of traffic growth.

When Bangkok’s impressive Suvarnabhumi Airport opened just over a decade ago it was envisaged that it would replace the city’s operationally constrained Don Mueang International Airport and have the capacity to cope with demand for the foreseeable future.

Its September 28th, 2006, opening meant that Thailand immediately boasted one of the most modern and operationally efficient gateways in the world and certainly one of the most unique in terms of its architecture and design.

None of that has changed, of course, and today Bangkok Suvarnabhumi (BKK) is one of the region’s biggest hubs handling 55 million passengers yearly.

However, what wasn’t entirely expected was the pace of traffic growth in Bangkok over the last decade. Indeed, Suvarnabhumi has experienced average annual traffic growth of 3.2% per annum since 2007 despite Don Mueang remaining open and now laying claim to being the world’s largest low-cost carrier airport.

The Thai government has responded to the continued upward trajectory in demand by outlining plans for a $1.57 billion, three-phase expansion programme for Suvarnabhumi, which will lead to the addition of a new Midfield Satellite Building, Terminal 2 and third runway over the next six years.

And for many at BKK operator, Airports of Thailand (AoT), the eagerly anticipated upgrade cannot come quickly enough.

“We managed to do this by implementing a new slot allocation system to ease airfield congestion, embracing Airport – Collaborative Decision Making [A-CDM], working more closely with our stakeholders, and making better use of manpower to improve passenger flows through the terminal during our peak hours.

“These measures show efficiency, but we recognise that new capacity enhancing infrastructure is needed to allow Bangkok Suvarnabhumi to develop as a hub.”

The expansion of the eastern end of the existing terminal building and construction of a new 28-gate Midfield Satellite Building and Automated People Mover (APM) to link it to the main terminal are the key projects of the first phase of the development programme.

The APM will operate in a tunnel under the airfield that will also house a new Independent Carrier System (ICS) for transporting hold luggage between the main terminal and aircraft gates.

“The Midfield Satellite Building will have 20 gates capable of handling Code E type aircraft [B747s] and eight which can accommodate aircraft up to size of the A380 aircraft.

“The eastern expansion of the existing terminal is scheduled for completion in 2019. The development phase includes the construction of a new four-storey office building, multi-storey car park capable of accommodating 1,000 vehicles and other utilities.

“They will be followed by a new 30 million passenger capacity Terminal 2. The complex will be constructed on the northern side of concourse A and, when completed in late 2021, will ensure that the airport is equipped to handle up to 90 million passengers yearly.

“The final phase of the development programme involves the construction of a new 4,000-metre runway that will significantly enhance our airfield capacity by allowing the airport to handle up to 94 aircraft movements per hour when completed in 2022.”

The runway development project is currently in the process of getting budgetary approval from the Thai government and ratification from the National Environment Board in order to prepare for Environmental Health Impact Assessment (EHIA).

Duangratana notes that in addition to raising the airport’s capacity, the new facilities will boost its operational efficiency and customer service levels, particularly in the area of passenger processing, which should be quicker and easier than ever before.

He promises that “highly advanced technology” will be deployed throughout the new Midfield Satellite Building and Terminal 2 to best facilitate the current and future needs of passengers and Bangkok Suvarnabhumi’s airline customers.

In the meantime, he reveals that AoT is turning to technology to improve passenger processing and reduce peak time overcrowding in the existing terminal.

Its commitment to new technology also extends to smaller things such as making it easier for passengers to access the airport’s Wi-Fi network and increasing the number of power points and mobile charging stations across the terminal.

He believes that Thailand’s popularity as a tourist and business destination; economic growth nationally and across the entire Asia-Pacific region; the ASEAN Open Sky Agreement/Policy; and the dynamism of the region’s low-cost carriers (LCCs) have all driven the upturn in traffic.

Soaring demand from China has also been a major factor, notes Duangratana, who points out that Chinese passengers now account for 20% of all the international passengers passing through Suvarnabhumi.

“I am sure many other airports are envious of our traffic growth,” states Duangratana. “We expect passenger numbers to rise by an average of 5% per year for the next 10 years.

“This rate of growth makes us confident that we can expect passenger numbers to reach 90 million annually by 2026.”

The strong predicted growth rates ensure that AoT has no plans to close down Don Mueang International Airport (DMK), and this view is unlikely to change, even after the completion of the current phased expansion of BKK.

“At the present, there are no plans to close down DMK as the two airports serve different functions,” explains Duangratana.

“BKK operates as Bangkok and Thailand’s main airport, handling domestic and international services and acting as a transfer hub for passengers travelling to other ASEAN countries.

“DMK, on the other hand, is very much Bangkok’s second airport and home to the low-cost carriers serving both the international and domestic markets. Their continued growth and rising passenger demand means that we need both airports.

“As a result, AOT aims to continuously develop both Suvarnabhumi and Don Mueang to meet air transportation market growth and maintain Bangkok’s status as a major regional hub.”

A total of 127 airlines serve BKK today, led by home carrier Thai Airways International, which is by far and away the biggest operator at the gateway accounting for around a third (31.7%) of the traffic.

O&D traffic dominates, point-to-point services accounting for 81% of the passengers handled at the airport in 2016.

The low-cost carriers have had an impact at BKK, although Don Mueang’s status as Bangkok’s LCC gateway means that they are currently only responsible for around 8% of its passengers.

“The LCCs have had some impact on the airport, but not nearly as much as at Don Mueang or other airports across Thailand,” says Duangratana.

“Across the country, the LCCs have increased their market share at AOT airports from 9.6% in 2004 to 44.9% in 2016. Their emergence and dynamic development has brought healthy competition to the market, which is good, but also led to increasing demands on BKK’s infrastructure.”

Like most major Asia-Pacific hubs, Suvarnabhumi has a rail link, the SA City Line providing services between the airport and downtown Bangkok’s Phayathai Station around 28 kilometres away.

And things are about to get even better for passengers and airport staff making the daily commute to work as an ongoing extension to the line will increase accessibility to more downtown districts and make it much easier to connect between Suvarnabhumi and Don Mueang.

Duangratana notes that the line is expected to be completed in 2019 and will be complemented by the planned 2022 opening of a new rail route that directly links BKK, DMK and Pattaya’s U-Tapao International Airport.

With passenger numbers on the rise and new infrastructure and improved rail access on the way, there is no doubt that Bangkok Suvarnabhumi is on the right track to ensuring that it remains one of the region’s biggest and most successful airports. 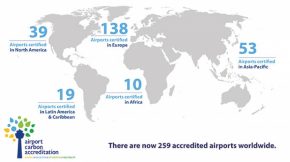 CAI CONFIRMS THAT IT WILL OPERATE JAPAN’S FUKUOKA AIRPORT FROM APRIL NEXT YEAR
NEWS
Made by Aviation Media Ltd. ©All rights reservd.