Joe Bates reports on Wellington Airport’s new master plan, which is designed to ensure that it has the infrastructure to handle the doubling of passenger traffic over the next 20 years.

Wellington Airport has unveiled the master plan that it believes will ensure that it is equipped for growth for the next 20 years.

With its annual passenger traffic expected to double to in excess of 12mppa by 2040, the New Zealand gateway says that it needs to plan for the future now to avoid becoming a victim of its own success and not having the facilities to meet future demand.

Under the plans, a new multi-purpose domestic and international jet terminal would be constructed. The development will extend to the south of the existing terminal, with the surrounding apron and at-grade car parking areas repurposed for jet aircraft. Meanwhile, the northern parts of the terminal will be converted for regional traffic – essentially ‘flipping’ the terminals around.

By 2040 the airport is expected to double its economic contribution to the region from NZ$2.3 to NZ$4.3 billion per year and facilitating more than 22,000 jobs.

Airport chief executive, Steve Sanderson, says: “The recent terminal expansion has done well to keep pace with domestic growth, but the international facilities are already facing congestion at peak times. The availability of gates is constrained during busy periods and busing of regional passengers is often required.

“The forecast growth will mean demand will exceed existing capacity and we need additional land to accommodate the airport’s operations and the new generation of aircraft that are carrying increasing numbers of passengers more efficiently.”

He says: “This has made us one of the most efficient and innovative airports in the world – but it limits our options. Growth to the south and east is the most feasible option given the airport’s geographical constraints.

“This masterplan sets out our vision to meet the needs of travellers and airlines, but also provide new possibilities and opportunities for the city, the region and New Zealand.”

Talking about the importance of the airport to the region, Sanderson says: “Our growth will play a pivotal role in shaping Wellington’s future. Wellington is now a destination in its own right with the city consistently rating as one of the most liveable in the world.

“Now more than ever, growing Wellington’s global connectivity is critical to the city and the country. That’s why we’re setting our sights on creating the airport of the future to support business and freight connectivity, increase employment opportunities, support sustainable tourism for New Zealand, improve personal travel options and ultimately enhance Wellington’s links to the world.

“This project also represents one of the largest investments in infrastructure in the region and will generate additional construction jobs and other opportunities for Wellingtonians.”

The airport is seeking to acquire the former Miramar South School site land and the southern portion of Miramar Golf Course to provide space for additional aircraft stands, taxiways and aprons.

Wellington Airport is working with Miramar Golf Club to purchase half its land. Following consultation with residents and its members, Sanderson says the airport will submit an application to Wellington City Council for a Notice of Requirement for a Designation for that land.

“Few airports serve their city as well in terms of proximity to the CBD. As a truly city airport, we acknowledge our responsibility to our neighbouring community and will work closely with them to ensure they are fully engaged.” 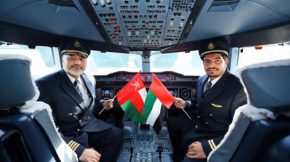 A380 FLIGHT MARKS 25 YEARS OF EMIRATES SERVICE TO MUSCAT
NEWS
Made by Aviation Media Ltd. ©All rights reservd.