THREE IS THE MAGIC NUMBER

Its facilities include a passenger terminal initially equipped to handle up to 2.5 million passenger per annum, 42-metre high ATC tower and single 3.6-kilometre long runway capable of accommodating aircraft up to the size of the A350 and B787.

The terminal’s bright orange roof above a blue and green building is designed to resemble the red sails of a boat out at sea, a common sight in nearby Halong Bay.

Other design features of the terminal include the use of natural energy saving materials, a wooden roof system, its own hanging garden and a spacious front hall filled with natural light that boasts its own koi fish pond.

Dutch consultancy and engineering firm, Netherlands Airport Consultants (NACO), assisted with the construction of the gateway, which is estimated to have cost around $310 million to build.

“It is the most modern airport in Vietnam. It will have positive influences on the passengers’ experience here in the airport,” says Romy Berntsen, a project manager and architect from NACO.

Talking about the concepts behind the airport’s design, NACO aviation division’s director of airport strategy and studies, and project director, Kris Pauwels, told Asia-Pacific Airports magazine: “As the new gateway to Quang Ninh province, the airport is designed to be the welcoming showpiece of the region.

“Creating the welcoming atmosphere was the starting point of the design, both aesthetically and in functionality. The terminal will have integrated, state-of-the-art IT systems to ensure smooth passenger flows. It will also have areas to relax, such as the outside gardens and lounges. In addition to the design, the welcoming atmosphere is also a focal point in the operations of the airport.

“New navigational aids near and at the airport and the energy saving LED airfield ground lighting, a first for Vietnam, allow for instrument landing system operations.”

As a new gateway for both domestic and international travellers coming to Halong Bay, the airport is expected to handle up to 500,000 passengers in its first year of operations.

Pauwels adds: “This greenfield airport improves accessibility to the beautiful region of Quang Ninh province, which is famous for the nearby UNESCO World Heritage Site Halong Bay.

“The Sun Group’s vision on hospitality is clearly embedded in the airport, resulting in Vietnam’s most modern airport. NACO is proud to have been able to support Sun Group throughout the construction phase and the launch of operations at Van Don International Airport.”

Plans are already in place to double the airport’s capacity to 5mppa and 51,000 tonnes of cargo annually by 2030 if tourism to Vietnam and the region continues to grow as expected.

The Sun Group is described as the country’s premier developer of tourism, leisure and entertainment-focused properties and projects.

On the same day as the airport’s opening it also officially unveiled the new Halong-Van Don Highway and Halong International Cruise Port.

A significant $43 million has been invested in Halong International Cruise Port, which is effectively the country’s first dedicated facility for accommodating international cruise ships.

Located in Bai Chay ward, Halong City, the port can accommodate two cruise ships (up to 225,000 GRT each) at the same time and a total of 8,460 passengers, including crew.

The port terminal, designed by Bill Bensley, one of the world’s most renowned and innovative architects, will be a new landmark for the city and Quang Ninh Province.

The opening of all three major infrastructure projects is expected to play a pivotal role in helping the province reach its full tourism potential and create new opportunities for international trade and economic co-operation. 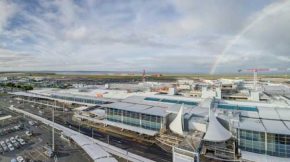