We shine the spotlight on a handful of exciting ongoing or recently announced development projects across the Kingdom of Saudi Arabia.

NEW RIYADH MEGA HUB AND AEROTROPOLIS
Saudi Arabia has unveiled plans for a new mega hub for Riyadh which will be called King Salman International Airport.

According to the master plan, King Salman International Airport will boost Riyadh’s position as a global logistics hub and stimulate transport, trade and tourism.

The airport is being designed to accommodate up to 185 million passengers and around 3.5 million tons of cargo annually by 2050.

The gateway will be located on a huge 57 square kilometre site allowing for six parallel runways and airport support facilities, residential and recreational facilities, and retail outlets.

And Saudi officials insist that it will will be built with sustainability at its core, ensuring that King Salman International Airport will be powered by renewable energy.

Foster + Partners won a competition to design the master plan for the new airport, which senior partner, Seif Bahaa Eldin, descibes as a “visionery development” that will play a significant role in shaping Riyadh into “a global hub of creativity and innovation”.

He noted that the master plan for King Salman International Airport will boost Riyadh’s position as a global logistics hub, stimulate transport, trade and tourism, and act as a bridge linking the East with the West.

The airport project is in line with Saudi Arabia’s vision to make Riyadh one of the top ten city economies in the world and to support the growth of Riyadh’s population to 15–20 million people by 2030.

In addition to its aviation infrastructure, the airport site will also include 12 square kilometres of airport support facilities, residential and recreational facilities, retail outlets, and other logistics real estate.

If all goes to plan, the airport aims to accommodate up to 120 million passengers per annum by 2030 and potentially 185 million by 2050, along with the yearly capacity to process 3.5 million tons of cargo.

And there’s more as its backers want the new gateway to become an aerotropolis centred around a seamless customer journey, world-class efficient operations, and innovation.

Riyadh’s identity and the Saudi culture, they say, will be taken into consideration in the airport’s design to ensure a unique travel experience for visitors and transit travellers.

“With sustainability at its core, the new airport will achieve LEED Platinum certification by incorporating cutting edge green initiatives into its design and will be powered by renewable energy,” says PIF.

The announcement comes as part of PIF’s strategy which focuses on unlocking the capabilities of promising sectors to enhance Saudi Arabia’s efforts in diversifying the economy, and it is in line with the National Transport Strategy and the Global Supply Chain Resilience Initiative.

“The terminal is very much of its place and connects passengers to the sensory experiences of the city, with natural elements, tempered light and state-of-the-art facilities.”

The new airport is expected to contribute $7 billion annually to non-oil GDP and create 103,000 direct and indirect jobs, in line with Vision 2030 objectives. 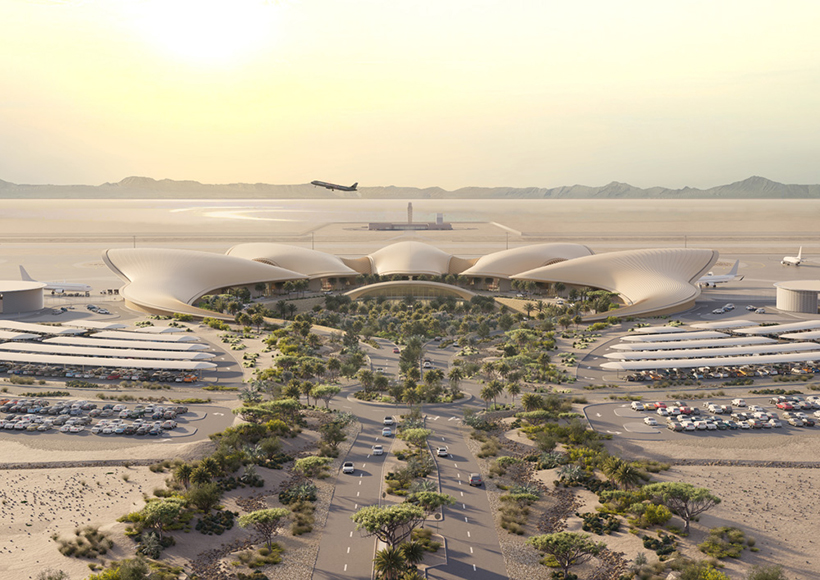 RED SEA INTERNATIONAL AIRPORT SET TO OPEN BY END OF NEXT YEAR
Red Sea Global (RSG), the developer behind Saudi Arabia’s new Red Sea International Airport and AMAALA resort, has appointed Reem Emirates Saudi to construct the façade and roof shell of the new gateway and its landside facilities.

The airport will be operated by daa International, the international subsidiary of Irish airport operator, daa, which recently signed a concession agreement worth over $266 million to oversee its development and operation.

“Not only is the airport sustainably designed, but aesthetically it takes inspiration from the forms of the surrounding desert, the green oasis and the sea.

“The roof shell, which Reem Emirates Saudi will deliver, typifies this, with dune-like pods radiating out from the centre, providing an arresting welcome as guests first arrive to the Red Sea from above.”

According to RSG, the airport design will include shaded areas and natural ventilation that minimises reliance on air conditioning.

It will, it says, feature five mini-terminals, which allow areas to be closed during slower activity periods, curbing the need to air-condition all sections and waste energy.

At the same time, the entire airport will be run by renewable energy, supporting RSG’s ambition to usher in a carbon-neutral, net-zero era for airport design and operations.

Designed by international architecture firm Foster + Partners, the new gateway is on track to welcome its first passengers in 2023.

The globally renown architect, states: “The new Red Sea Airport has been inspired by the forms of the desert, the green oasis and the sea, removing the usual hassle associated with travel by providing a tranquil and memorable experience for passengers from the moment they arrive.

“The design of the terminal aims to bring the experience of a private aircraft terminal to every traveller by providing smaller, intimate spaces that feel luxurious and personalised. The form of the roof shells cantilevers on the landside and airside to provide shade to the passengers.

“An internal green oasis with an indigenously planted garden forms a green focus, creating a relaxed, resort-like atmosphere within the airport terminal. The airport will be powered by 100% renewable energy.

“The arrival experience is about speed of processing passengers, while welcoming them to their destination along with giving them a first impression of the Red Sea Experience. Upon arrival, passengers follow the natural spatial flow down through the lush oasis landscape towards the Welcome Centre, where they are met and welcomed to the Red Sea Resort.

“All security and immigration checks are dealt with speedily and the checked-in baggage is sent to the resorts directly. The centre offers an immersive experience of the highlights at the resort, giving visitors a flavour of what is to come.

The departure sequence is generally longer than the arrival experience, so the spaces are designed for longer waiting times with larger, more relaxed spaces. The five departure suites are arranged as a series of pods to allow an easy transition from cars to plane.

“Passengers are dropped off outside the terminal and quickly enter one of the departure pods which feature spas and restaurants enveloped in a relaxed atmosphere. The baggage is loaded onto the aircraft directly after being checked-in at the resort.”

The airport is initially expected to handle a few thousand passengers per annum before welcoming up to one million domestic and international tourists per year by 2030.

OFFICIAL OPENING OF RIYADH’S REVAMPED TERMINALS
Riyadh’s King Khaled International Airport has celebrated the official opening (pictured above) of its refurbished Terminal 3 and 4 to meet rising demand for air travel to the Kingdom of Saudi Arabia and across the globe.

The terminals, opened in time for football’s World Cup tournament in neighbouring Qatar, will better equip the gateway to accommodate strong traffic growth this year, with passengers numbers now close to 2019 levels.

Between them the terminals have 14 air bridges, over 100 check-in counters and are capable of handling more than 5,000 passengers per hour.

Mohammed bin Abdullah Al-Maghlouth, CEO of Riyadh Airports Company, said: “Our growth plan will see us enhancing the airport’s capacity and upgrading the services provided to travellers from around the world.”

While Saudi Arabia’s Minister of Transport and Logistics, Saleh bin Nasser Al-Jasser, noted: “We will continue to work to raise the capacity in the Kingdom’s airports and improve the passenger experience in order to achieve the goals of the national strategy for transport and logistics services in accordance with the Kingdom’s Vision 2030.”