John Brash, founder of global branding agency, Brash, explains why he believes that the rebranding of Abu Dhabi Airports is an ode to the future of aviation.

It’s no secret that the aviation sector has been beset by challenges since the outbreak of the global pandemic. However, as with any challenge, comes great opportunity.

This is particularly true in the Middle East, where airlines are global brand ambassadors for the emirates or countries they represent, and airports are gateways for investment, tourism and population growth.

Aviation traffic in the region has steady increased year-on-year for the last decade and, in recent years, the UAE in particular has past several milestones in aerospace sector development – notably, the sending of a probe into Mars’ orbit in 2021.

Meanwhile, business aviation is at different stages of development across the region; some countries are still demonstrating a dearth of significant infrastructure, whilst others are viewed as the best in the world.

Regardless of where they stand in terms of development, for each country a thriving aviation sector can serve to unlock new growth. This is certainly the case in Abu Dhabi, where the aviation sector is a key pillar of the emirate’s economic vision.

Abu Dhabi Airports (AD Airports) is a cornerstone piece of this plan, and recent investment into its corporate architecture and visual identity reflect the Emirate’s commitment to re-shape the future
of aviation, whilst simultaneously bolstering the role the sector can play in Abu Dhabi’s socio-economic development.

Making good on these ambitions, however, required a new brand identity for AD Airports that could credibly speak to the ambition, shifting existing perceptions and elevating the country’s role within the international aviation market.

As an entity, AD Airports was already well established. Operating five airports, the challenges it faced were more about changing stakeholders’ perceptions of the organisation as a complete ecosystem, rather than an operator in siloes.

After all, AD Airports doesn’t just own and operate airports; it provides an aviation ecosystem that can fundamentally unlock growth for the Emirate.

This contribution is rounded, varying from supporting tourism, to running a free zone for businesses in related sectors – enabling it to take a unique and holistic role in developing the industry’s future, beyond conventional parameters of how aviation benefits other sectors.

This strategic pivot – which responds to the changing nature of the aviation industry as a whole – is communicated through a new corporate identity.

Recently launched, this new identity is inspired by a redefined purpose and reaffirms AD Airport’s position within the emirate’s economic vision.

The new identity deepens the connection between AD Airports and other key players, such as government stakeholders, airline partners and most importantly, passengers.

From a passenger perspective, the new identity also had to reflect Abu Dhabi’s world-class airport ecosystem, which was set up to offer remarkable travelling experiences. The new vision, ‘Shaping
the Future of Airport Experiences’, emphasises AD Airports’ excellence and innovative approach in everything they do.

Whilst seamless and inspiring travelling experiences are not new passenger demands, it was critical that the new identity underlined AD Airports’ commitment to delivering them, particularly as travel behaviour has changed due to the pandemic.

A new colourway of dark and light blues strikes a balance of being both bold and corporate – allowing AD Airports to flex to different demands as it grows.

Secondary colours of blues, greens and yellows speak to the multi-faceted characteristics of Abu Dhabi; from the traditional architecture to the dunes of the desert, the mystery of the turquoise sea and the rich tones of the mangrove, these colours express the wonders for the built and natural landscape.

The wordmark of Abu Dhabi Airports appears seamlessly in both Arabic and English, creating harmony and balance across the two languages, but with a modified letter ‘A’ to ensure it remains distinct when used separately.

As AD Airports enters an exciting stage of growth, their redefined visual identity celebrates the past and champions the future reflecting their futuristic vision within the aviation industry. They are a global facilitator of tourism, and their tone of voice is demonstrated throughout their messaging.

The aviation industry in the Middle East is constantly evolving and we look forward to seeing how this space in the region continues to lead the world. 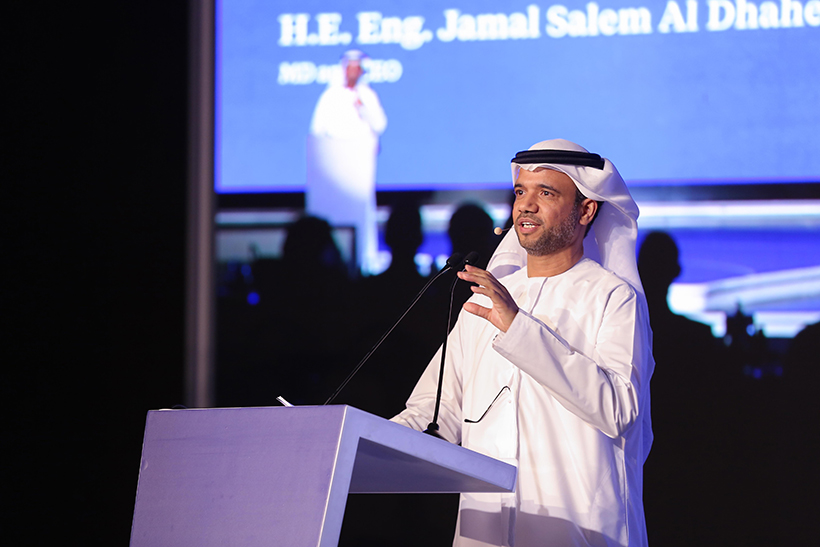 REFLECTING A CHANGING INDUSTRY
Abu Dhabi Airports has no doubt that its ‘refreshed brand’ will represent it well in the coming years as the company and Abu Dhabi continue to evolve.

AD Airports’ managing director and CEO, His Excellency, Jamal Salem Al Dhaheri, said: “As we prepare to enter our next chapter of growth and development, our corporate rebrand reflects our bold vision to shape the future of airport experiences.”

The company notes that its new corporate identity is inspired by a redefined purpose, mission and set of the organisation, underpinning its future growth plans for Abu Dhabi Airports, reaffirming its commitment to Abu Dhabi’s economic vision and the wider aviation ecosystem through three areas of priority:

“Our evolving priorities are representative of our ambition to be at the forefront of the aviation sector,” said Ahmed Jumaa Al Shamisi, acting chief strategy officer of Abu Dhabi Airports.

“Guided by our redefined vision and mission, we have identified key pillars and priorities that will fuel our future growth, as we look to strengthen our value proposition to our stakeholders, continue our economic contributions to Abu Dhabi, and become more competitive, agile and dynamic as a business.”