Asia-Pacific Airports takes a closer look at a handful of key infrastructure development projects making headlines across the region.

When open, the Chinese gateway will be equipped with four runways and four terminals that between them are capable of handling up to 80 million passengers and 580,000 aircraft movements per annum.

According to the Civil Aviation Administration of China, China will this year accelerate the construction of a world-class airport cluster for the development of the Chengdu-Chongqing economic circle.

“Creating the airport cluster is a crucial task for the construction of the economic circle,” said administration official, Sun Wensheng, noting that the airports in the region do not currently have sufficient capacity to handle international flights.

If all goes to plan, by 2025 the airport cluster will have 12 airports with annual transport capacities of 210 million passengers and 3.7 million metric tons of cargo, handling about 1.5 million flights annually, according to a circular issued by the administration.

The Nordic – Office of Architecture, which won the interior design competition for the 350,000sqm Terminal 3B, reveals that its concepts for the new complex – which when complete will become the world’s largest airport satellite building – were shaped by local rivers and Chongqing’s rich culture, history and scenery.

The firm, which is working on the project with the China South West Architectural Design Institute and Shanghai United Design Group, notes that “safe, green, smart and human-oriented” were also central focuses of T3B’s design.

We can report that the main steel and concrete structure of the new terminal has been completed and that construction work will now focus on the roof structure, the façade, the electro-mechanical plumbing systems and the interior.

The new terminal is being constructed by China Construction Eighth Engineering Division, which has helped build facilities at more than 70 airports in China. 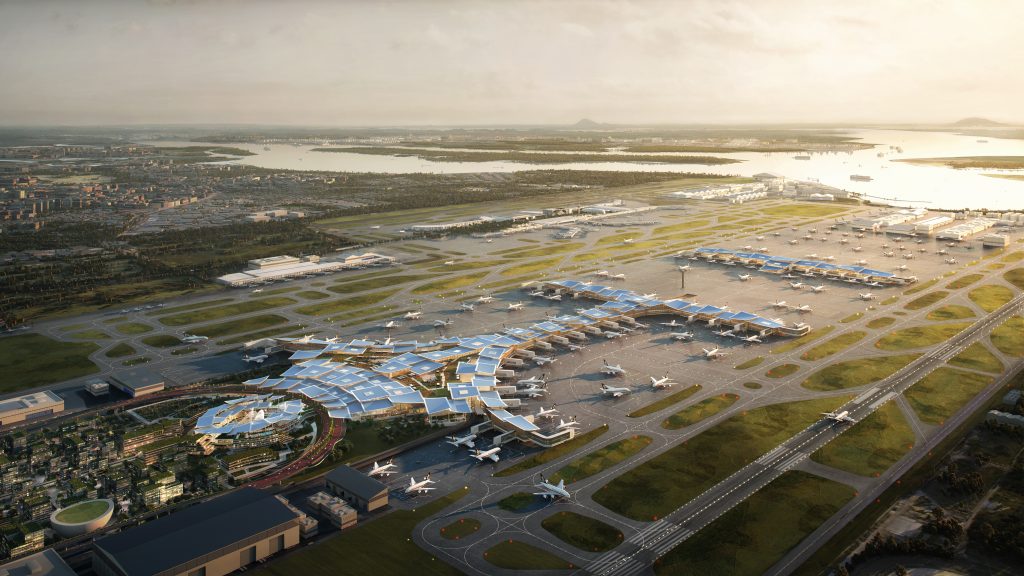 Singapore Changi’s Terminal 5
Construction of Changi’s planned Terminal 5 is set to resume in 2024, ensuring that it is operational by the mid-2030s, according to Singapore’s Transport Minister, S. Iswaran.

Work on the project was halted in May 2020 when the global COVID-19 pandemic began to bite in Singapore, and passenger numbers at the gateway – like in much of the rest of the world – plummeted due to new health requirements and travel restrictions.

Iswaran notes that the original designs of the new terminal have been updated since May 2020 and will continue to be fine-tuned to ensure that it is equipped to meet future demand.

In effect this has meant that T5’s design has become “more modular and flexible” as a result of the pandemic, which has shown just how quickly the operational requirements of airports can change in a crisis.

The pandemic, for example, has sped up the implementation of new touchless technologies at airports across the globe and led to the launch of a host of new apps which travellers can use to order food and drink to be delivered to them rather than having to queue up to order or dine at an airport restaurant.

He says: “We have taken the opportunity of the two-year hiatus to comprehensively review the T5 design to make it more modular and flexible and enhance its resilience and sustainability.

“Given the current and projected recovery in air travel demand, we have a renewed impetus to secure our infrastructural capacity for growth.”

Changi Airport’s T5 was set to handle up to 50 million passengers a year in its initial phase, and cover a land area equivalent to about 667 football fields. Whether this remains the case is unclear as much has changed since the project was first anounced in 2013.

What is clear though is the fact that T5 will be a green and sustainable building, equipped with solar panels and smart building management systems as well as being ready for the next generation of alternative aircraft fuels.

The new $16.3 billion super hub will be located 40 kilometres east of Ho Chi Minh City and boast four runways and four passenger terminals capable of handling up to 120 million passengers by full build out in 2050.

The city’s existing Tan Son Nhat International Airport (SGN) has comfortably handled in excess of 36 million passengers per annum and will continue to be upgraded and expanded to meet demand. But its location at the centre of a densely populated area of Ho Chi Minh City effectively rules out any significant new additions to its infrastructure and means that the government must look for capacity enhancing options elsewhere.

Long Thanh International Airport’s master plan outlines three phases of construction, with the first phase scheduled for completion in 2025, including the development of a single terminal building, a
4000m x 60m runway and facilities to accommodate up to 25 million passengers and 1.2 million tonnes of cargo per annum.

Another significant step for Delhi Noida
Bechtel Engineering and Construction India Private Limited has signed a contract to support Tata Projects in its delivery of Delhi’s new Noida International Airport.

“We’re looking forward to supporting the construction of this exciting and ambitious airport – our first association with an airport in India – that will cater for millions of passengers, providing the comfort and efficiency expected of an international gateway,” said Avijit Ray, manager of Bechtel’s offices in India.

“We’re pleased to have Bechtel as a partner to help provide support to Tata’s team and help in the delivery of this nationally-significant new airport,” said Vinayak Pai, CEO and Managing Director of Tata Projects Ltd.

“We shall deploy the latest technologies in the construction of India’s first net-zero emissions airport building, while meeting the highest standards of quality, safety, and sustainability.”

Christoph Schnellmann, CEO of Yamuna International Airport Private Limited, said: “Together with TATA Projects, we’re working to deliver a passenger terminal, runway, and other airport infrastructure with a capacity of 12 million passengers annually, by 2024.

“We are aiming to enable, promote and strengthen all-inclusive sustainable development of aviation ecosystem in India.

“Noida International Airport will bolster employment generation and economic growth in the state as well as the country.”