On the right track

While few Asia-Pacific airports can boast high speed rail links like the ones at Frankfurt and Zurich airports in Europe, the region is no stranger to impressive train connections with Kuala Lumpur, Hong Kong, Incheon, Shanghai Pudong and Tokyo Narita arguably boasting some of the fastest and most convenient.

And they could soon be joined by Melbourne Airport (Tullamarine) in Australia if long-awaited plans for a new rail link between the gateway and the city – and subsequently Victoria’s regional and metropolitan train network – finally come to fruition and construction work starts on the project in 2022.

Talked about since the 1950s, the Melbourne Airport Rail link is still a few years off due to a targeted 2029 opening subject to relevant Victorian and Federal planning, environmental and other government approvals.

However, at the time of going to press it has never been closer to becoming reality, with community and stakeholder engagement likely to provide key input into the project’s final planning and design.

Part of Victoria’s Big Build, the plan is for trains to travel from Melbourne Airport (MEL) through to Sunshine Station, then into the Metro Tunnel and the heart of the Central Business District (CBD), before continuing on to the Cranbourne and Pakenham lines.

For it to happen, dedicated new track will have to constructed along the existing Albion-Jacana freight corridor between Sunshine and Airport West along with a new 550-metre long rail bridge across the Maribyrnong River.

Backed by the state of Victoria and the Federal Government to the tune of A$5 billion each, supporters of the project note that for all passengers, Melbourne Airport Rail will provide:

Australia’s Federal Minister for Communications, Urban Infrastructure, Cities and the Arts, Paul Fletcher, said: “A global city like Melbourne with a major airport like Tullamarine needs a world class rail connection between the city and the airport.”

He noted that the development of the “state-of-the-art connection” was expected to provide around 8,000 construction jobs.

While Victoria’s transport infrastructure minister, Jacinta Allan, confirmed that the project will “give a direct connection for airport travellers into the heart of Melbourne CBD in under 30 minutes.” 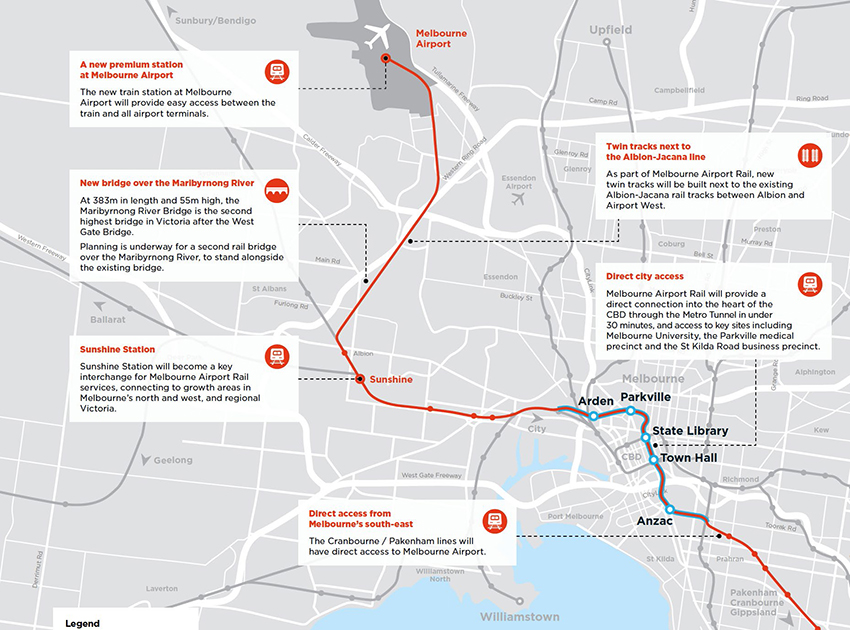 Concept designs for the new bridge over the Maribyrnong River were unveiled earlier this year when the State Government described how airport trains would gradually rise to travel on new elevated twin tracks between Sunshine and the Albion Junction before descending and continuing at ground level alongside the existing freight line through Sunshine and Airport West towards the airport.

At 50 metres high, it will be the second tallest bridge in Melbourne and, according to Allan, is a big part of the new rail link.

She commented: “It’s fair to say that both levels of government are very keen to get into the delivery phase of this project as we finalise the planning and design work.”

Fletcher added: “We know how long people have been waiting to see Melbourne Airport Rail become a reality, and these concept designs show just how much progress is happening on this transformational project.”

While not directly involved in the rail link’s planning, funding and construction, Melbourne Airport is fully behind its development, which it says will make airport journeys quicker and easier for passengers and benefit the environment by reducing road traffic.

On its website, the airport states that it “actively supports” the development of a rail link to Melbourne Airport, noting that it will provide a necessary addition to today’s mix of transport modes, as airport passenger numbers rise in the future. Indeed, MEL’s chief executive, Lyell Strambi, is quick to point out that his gateway has been a fierce advocate for rail infrastructure to the airport.

He said: “International visitors to Melbourne expect rail transport from the airport. It is an expectation of a truly global city. Victorians too, have been crying out for an airport rail link as Melbourne continues its trajectory to be Australia’s biggest city by population.

“We are fortunate to have plenty of room to grow on airport, with runway and terminal investment over the next 20 years forecast to service almost 70 million passengers by 2038. Our curfew-free, 24/7 operations are a huge competitive advantage for Melbourne and Victoria.

“This can be a transformational infrastructure project for our community, as we prepare to start the long road to economic recovery.”

Strambi added: “To be successful, the Melbourne Airport Rail Link needs to be fast, frequent and reliable. We look forward to working with government to see how these objectives will be met.

“We will work constructively to make sure the airport rail link delivers the best possible passenger experience.”