Brisbane Airport is consulting with its airline partners about the possibility of a future Terminal 3 as it looks at the best way of handling a projected 50 million passengers annually through its terminals by 2040.

“We are running out of terminal capacity and we’re looking at the best location, together with our airline partners, for where that new terminal will go,” said Brisbane Airport Corporation (BAC) CEO, Gert-Jan de Graaff.

“We think it will be in between the two runaways because that’s the perfect location to minimise aircraft taxiing, and it is close to our current domestic terminal.

“We need more domestic capacity to cater for demand. A few of our domestic airlines will likely go into Terminal 3. We might even allocate some international traffic in there as well to provide for better connectivity between domestic and international flights.

“Terminal 3 will be state-of-the-art so that will be a terminal we’ve built for the 2030s. Sustainability will be front and centre, as will accessibility.”

Brisbane Airport is currently planning to invest more than A$5 billion over the next 10 years on upgrading its existing terminals, building extra car parking, developing BNE as a regional aeromedical hub, expanding its retail precincts and building more freight facilities.

China’s Central Government has approved the expansion of Macau International Airport to raise the gateway’s capacity, boost its operational efficiency and improve connectivity to the Special Administrative Region (SAR).

Like in nearby Hong Kong, the expansion project will involve reclaiming land from the sea, which in Macau International Airport’s case is expected to be around 130 hectares, and take place in
different phases whose timings will be based on traffic demand.

The Macau SAR Government says that it “hoped that improvements to airport infrastructure and the further opening of the air transport market, would facilitate the recovery and development of the aviation industry locally, and help create a more sustainable path for Macao’s civil aviation sector.”

Macau’s Civil Aviation Authority (AACM) has also issued a statement expressing gratitude for Beijing’s approval and optimism in the future development of the aviation sector.

It reads: “AACM is confident that the enhancement of the airport infrastructure, the optimisation of the terminal facilities, the gradual resumption of flight services, and the expansion of the aviation network will offer more diversified services to both the Macau residents and the travellers from the Pearl River Delta Region.”

Hari Marar, managing director and CEO of airport operator, Bangalore International Airport Limited (BIAL), said: “With the launch of T2, we have expanded our capacity to cater for an additional 25 million passengers every year. What makes T2 more special is not just its scale and size, but also the fact that it’s inspired by Bengaluru city.

“Built as a terminal in a garden, T2 reflects all that Bengaluru stands for – a green, modern, innovative, sustainable, and culturally rich city. Over the last 14 years, BLR has evolved as the Gateway to South India and, with this next phase of expansion, it aims to position itself as the new Gateway to India.”

Located on the north eastern side of Terminal 1 and designed by New York-based architectural firm SOM, BIAL says that the new 255,661 square metre terminal has been designed to ensure quick processing times and easy to navigate journeys through its facilities.

The terminal’s interiors are clad in engineered bamboo inspired by traditional Indian cane weaving to give the complex a contemporary yet classic look and feel and its L-shaped piers are equipped with 19 boarding gates for Code C equivalent aircraft.

BIAL notes that the four guiding principles that influenced the design and architecture of T2 were the ‘terminal in a garden’ concept, sustainability, technology, and art and culture.

Indeed, Terminal 2 is designed as a tribute to the Garden City of India and the passenger experience is said to offer a “walk in the garden” as visitors pass through 10,000sqm of green walls, hanging gardens and outdoor gardens.

Also worthy of note is the fact that the terminal will 100% utilise renewable energy across the campus, the accolade helping it become the largest terminal in the world to be pre-certified with a Platinum LEED rating by USGBC (US Green Building Council) prior to commencing operations. 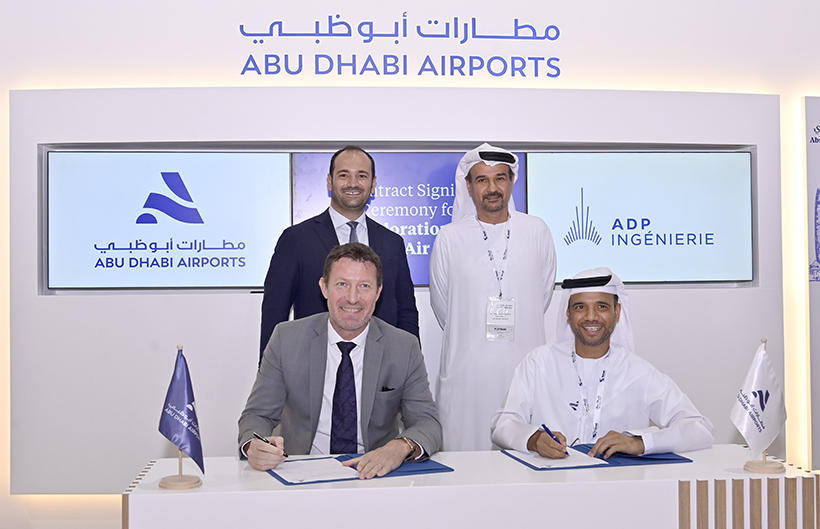 Abu Dhabi Airports has signed a Memorandum of Understanding (MoU) with Groupe ADP to explore the potential of Advanced Air Mobility (AAM), and specifically the use of electric vertical take-off and landing (eVTOL) aircraft, in the Emirate.

Under the terms of the agreement, Abu Dhabi Airports and Groupe ADP will engage in the joint planning, design, development, and operation of ground infrastructure for AAM in Abu Dhabi, following engagement with stakeholders, a feasibility study and market assessment to develop the industry roadmap.

“We are excited to partner with industry-leading Groupe ADP to explore the potential of introducing AAM to Abu Dhabi,” enthused His Excellency, Jamal Salem Al Dhaheri, managing director and CEO of Abu Dhabi Airports.

“This new system integrates flight technologies with transformational aircraft designs which utilise electric power to hover, take off, and land vertically, enabling sustainability in air transport for both passengers and cargo.

“This agreement is a testament to our commitment to lead the way by collaborating with our partners to deliver innovation and technology that drives efficiency, convenience and most importantly, sustainability.” 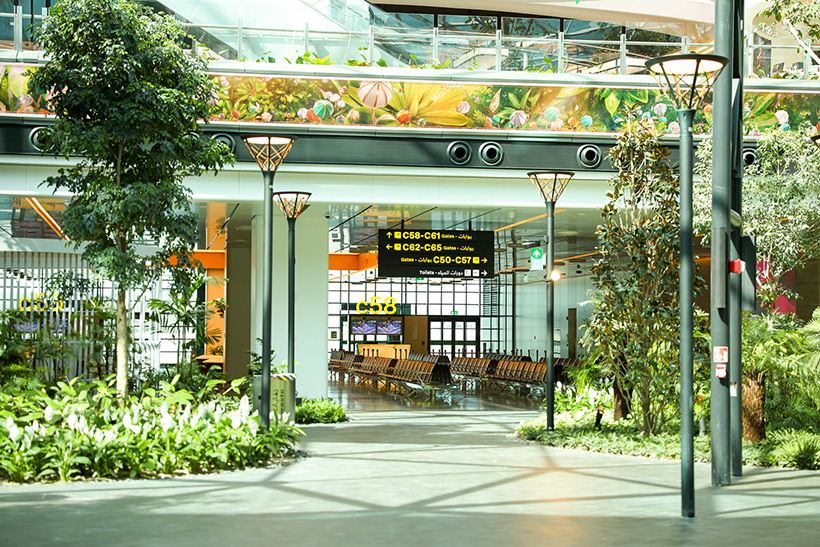 Despite being less than a decade old, in early November, Hamad International Airport officially unveiled its newly completed airport expansion project to the world. The Qatari gateway believes the expansion, which includes what it calls a “masterpiece garden at the centre of the airport”, will enrich the passenger experience and transform the airport into an “extraordinary destination where any journey is worthwhile”.

Airport CEO, Badr Mohammed Al Meer, said: “We are immensely proud to officially launch our airport expansion. Our growth plan will see us welcome over 58 million passengers annually – offering global travellers the best services the industry has to offer.

“Through the expansion, we have upgraded our facilities and offerings – creating the ultimate destination for passengers. From world-class services to endless F&B and retail offerings, the expansion further strengthens our ambition as we look towards maintaining our status as the best airport in the world.”

The Doha gateway’s ambitions and futuristic vision can be witnessed within the newly announced ORCHARD – a tropical garden with over 300 trees and 25,000 plants at the centre of the terminal expansion, which the airport boldly claims is “set to truly elevate passenger’s experiences and redefine airport travel”.

The airport notes that the unique design of the area will allow the trees and plants to easily adapt to the internal conditions and grow throughout the life of the airport – with natural light to create calming ambiance and promote a sense of wellbeing to all who venture inside.

Consisting of one expansive terminal, the airport says that it now welcomes passengers with facilities and services “curated for all ages”.

Operator, Tibah Airports Operation Co, believes that the recognition is a testament to its commitment to reducing carbon emissions and protecting the environment through the application of international standards and global best practices.

The airport notes that its efforts are aligned with the Kingdom’s vision for sustainable development and its goal of achieving carbon neutrality (zero net carbon emissions) by 2060 as part of the Saudi Green Initiative.

“This achievement confirms and reflects the continuous support given by the General Authority of Civil Aviation to us in order to remain a leading and sustainable gateway to serve pilgrims and visitors and improve the passenger experience.” 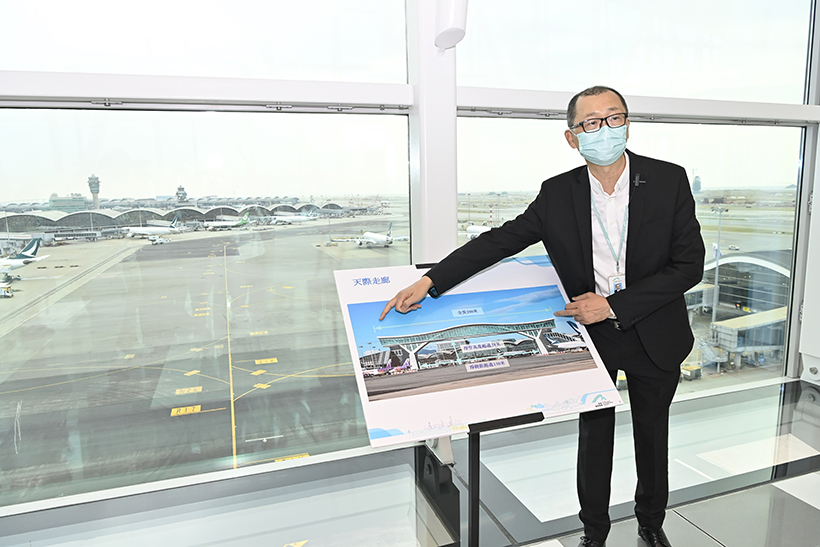 BUSY END TO THE YEAR FOR AIRPORT AUTHORITY HONG KONG

Hong Kong International Airport has ended a difficult year with new two major developments – the opening of its impressive new Sky Bridge and the signing of a Memorandum of Understanding (MoU) to strengthen co-operation with Zhuhai Airport in Mainland China and “propel the development of the aviation industry in the Greater Bay Area.”

Speaking about the new MoU, Airport Authority Hong Kong (AAHK) chairman, Jack So, said: “The deepened co-operation between the two airports will give full play to the respective advantages of Hong Kong and Zhuhai, as well as leverage the convenience brought by the HZMB [Hong Kong-Zhuhai-Macau Bridge] achieving mutual benefits.

“Both sides will join hands in developing a high-end aviation industrial park, bringing international partners to Zhuhai and creating an important new collaboration platform for Guangdong and Hong Kong to promote the development of the aviation industry.

“The collaboration will boost the demand for logistics and air cargo services, and provide service to the whole country and worldwide.”

HKIA’s 28-metre high and 200 metre long Sky Bridge spans a taxiway between Terminal 1 and its Satellite Concourse (T1S), making it the world’s longest airside bridge that allows Code F aircraft such as the A380 to pass under it.

AAHK’s executive director of engineering and technology, Ricky Leung, enthused: “Sky Bridge is aspired to be the iconic feature at HKIA. It offers passengers a spectacular view of the entire airport with the nearby landscape as the backdrop.” 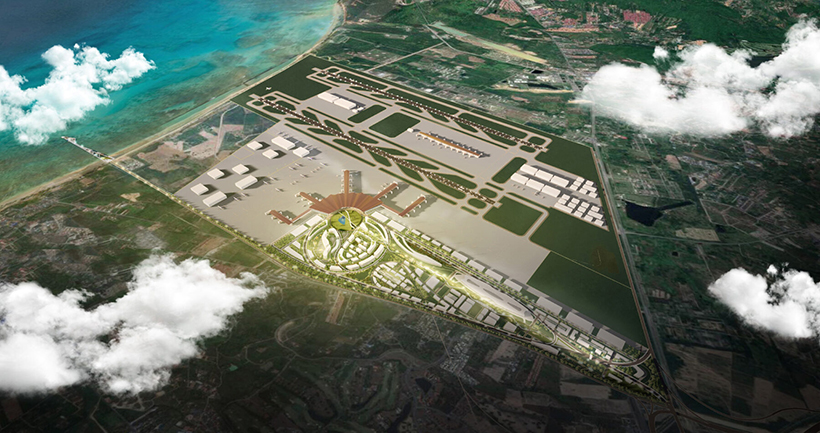 According to press reports in Thailand, the Thai Cabinet has agreed in principle to the expansion of U-Tapao Airport, which is located in Rayong province around 30 kilometres from the popular tourist town of Pattaya.

If the plans go ahead, the airport’s existing terminal will be upgraded and expanded and a new Terminal 3, second runway, taxiways and other facilities added in the next phase of its development to effectively equip it to handle up to 15 million passengers per annum.

However, the ultimate ambition is for U-Tapao-Rayong-Pattaya International Airport (UTP) to welcome up to 60 million passengers per annum, and to help make this possible the new runway will be at least 3,500 metres long to ensure that it is capable of accommodating aircraft up to the size of the A380.

Owned by the Royal Thai Navy, UTP is a joint civil-military airport serving the Thai cities of Rayong and Pattaya and home to a large Thai Airways maintenance base.

Its new Terminal 2 opened in early 2019 meaning that the airport is currently capable of handling around three million passengers per annum, although the continuing impact of the COVID pandemic on air travel in the Asia-Pacific region meant that it only handled around 136,000 passengers and 3,920 aircraft movements in 2021.

The ambitious master plan for UTP was created by Oneworks at the request of the consortium pushing for the airport’s development. The consortium includes GMR Infrastructure, Thai AirAsia and other stakeholders.

Previous Article
VIEW FROM THE TOP
Next Article
The Changi way