Senior manager for external affairs, Vivian Fung, reports on the latest ACI news, views and developments from the busy Asia-Pacific region and across the world.

Airports continue to lead the way in the aviation industry’s efforts to reduce its impact on the environment, the latest figures from ACI revealing that 259 airports now use its Airport Carbon Accreditation programme to manage and reduce their carbon footprint.

The six, which have achieved Level 3+ ‘Neutrality’ status in ACI’s Airport Carbon Accreditation programme, currently account for 5.3% of air passenger traffic in the Asia-Pacific region.

Japan’s Tokyo Narita, Kansai and Osaka Airports and Taoyuan International Airport in Chinese Taipei recently moved up to Level 3 ‘Optimisation’ by stepping up their activities from reducing their own carbon emissions and engaging other companies on the airport site to reduce their emissions.

While Asia-Pacific airports to recently move up to Level 2 ‘Reduction’ include Noumea la Tontouta in New Caledonia and Salahah Airport in Oman.

At the opposite end of the scale, Asia-Pacific airports that were carbon accredited for the first time in 2018 included VINCI Airports operated Kobe Airport in Japan at Level 2 ‘Reduction’ and Zhengzhou Xinzheng International Airport in China and the four Airports Authority of India operated gateways of Netaji Subhash Chandra Bose Airport, Bhubaneswar Biji Patnail Airport, Varanasi Lal Bhadaur Shastri Airport and Trivandrum International Airport, which all achieved Level 1 ‘Mapping’ status.

Kazakhstan is geographically the largest country in Central Asia and home to the multi award-winning airline Air Astana, which counts Almaty as its base and Astana as its secondary hub.

ACI Asia-Pacific is pleased to welcome the two airport operators to our association, and we look to further enhancing co-operation with the aviation community in Central Asia.

The ‘Learning and Development’ (L&D) theme of the final 2018 meeting of the Regional Human Resources (HR) Committee helped draw a crowd of 40 participants from 15 airport members to Abu Dhabi in December.

Specifically, in the first two days, participants took part in consultant-led group discussions, exercises and debates on ‘e-Learning’ and the ‘70-20-10’ HR principle. A group exercise focused on improving the business value of learning and development (L&D) and encouraged participants to play different stakeholder roles, ranging from young graduates to the airport CFO, so that they could view L&D from another perspective.

On the third day, Abu Dhabi Airports arranged a visit to the Midfield Terminal Building in the morning and city tour in the afternoon to conclude the meeting.

The next meeting will be held on April 1, 2019, in conjunction with the ACI Asia-Pacific/World Annual General Assembly, Conference and Exhibition in Hong Kong.

ACI World has published an Advisory Bulletin to help airports address the risks posed by drone-related disruption to aircraft operations.

ACI World believes that, while regulators and police will likely be the authority in addressing both enforcement and the preparation of anti-drone measures, all industry stakeholders must work with the relevant agencies to take action to protect the safety of aircraft operations.

The recent disruption caused by the reported drone sightings at London Gatwick Airport – and recent temporary cessation of some operations at London Heathrow Airport and Newark Liberty International Airport following reported sightings of a drone – are the most widely-publicised of a series of incidents which have created debate about the best approach to preparing for, and dealing with, drone-related issues.

ACI’s latest Advisory Bulletin proposes that airports lead the discussion and work closely with national authorities and local law enforcement agencies to develop a risk-based approach to dealing with the risks of drone incursions. This approach should take into account the impact on aircraft operations and available mitigation measures including anti-drone actions.

“The recent drone-related disruption at airports in Europe, and their potential impact on airport safety and operations, have raised significant questions for airport operators around the world on their preparedness to handle situations like this,” says ACI World director general, Angela Gittens.

“The highest authority for enforcement activities and initiating anti-drone measures will clearly be the relevant national authority, such as the Civil Aviation Authority in the case of the UK, and local law enforcement agencies.

“It is incumbent on all industry stakeholders, however, to take action to protect the safety of aircraft operations in co-ordination with these agencies. Airport operators should be aware of national laws and regulations pertaining to drones, with an understanding that these may reside outside of civil aviation.”

The Advisory Bulletin lays out actions that an airport could take to lead the discussion with governments, regulators and law enforcement agencies to strengthen anti-drone measures and mitigations; they include:

ACI World has requested that members share their experience and lessons learnt on anti-drone measures and drone related incidents so that relevant practices can be adopted across the industry.

Preliminary figures for 2018 show that passenger traffic in Asia-Pacific and the Middle East grew by +6.6% and +2.1% respectively during the calendar year.

The year started off with robust passenger demands but growth trends began easing throughout the second half of 2018.

In Asia-Pacific, most of the growth continued to be generated in China and India. Indeed, the two countries together contributed more than 60% of the upturn in traffic across the region.

Beijing Capital cemented its status as the region’s biggest gateway, handling over 100 million passengers per annum for the first time in its history. Its total of 100,983,000 (+5.4%) means that only Hartsfield-Jackson Atlanta International Airport in the US welcomes more passengers.

Both regions experienced a slowdown in the second half of the year, as witnessed in December, when cargo volumes in Asia-Pacific and the Middle East declined by -2.5% and -0.9% respectively due to the weakened global economy and a reduction in exports and manufacturing activities.

Uncertainties resulting from trade disputes and a slower global economy didn’t help in the final six months of 2018, although these negatives were countered by growth in the e-commerce and pharmaceutical sectors.

The impact and uncertainties of the trade war between China and the US will continue to cast a shadow over the air freight demands in 2019.

The fifth and final DNA seminar of 2018 was held in Phnom Penh, Cambodia, in early December in co-operation with Cambodia Airports.

The three-day seminar on the topic of ‘Understanding ICAO Annex 14, was attended by 17 airport representatives from Cambodia, the Cook Islands, India, Malaysia and Myanmar.

Tags:
Previous Article
FOCUSING ON THE PASSENGER
Next Article
MIXED FORTUNES FOR REGION’S AIRPORTS IN FEBRUARY AS TRAFFIC RISES 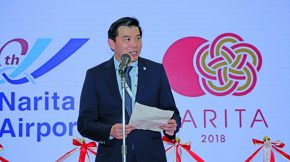