Airports continue to do their bit to reduce aviation’s impact on the environment, with ACI recently revealing that a total of 246 gateways across the planet now use its Airport Carbon Accreditation programme to manage and reduce their carbon footprint.

The total includes an ever growing number of airports across ACI’s Asia-Pacific region, with India, Australia, China and Thailand leading the way in terms of numbers and airports achieving the ultimate goal of carbon neutrality.

In facts and figures, as of November 2018, 47 airports across the Middle East and Asia-Pacific were carbon accredited with a magnificent six achieving carbon neutral status – Bengaluru–Kempegowda, Delhi-Indira Gandhi, Hyderabad–Rajiv Gandhi and Mumbai-Chhatrapati Shivaji in India; Sunshine Coast in Australia; and Amman-Queen Alia in Jordan.

The six, who have achieved Level 3+ ‘Neutrality’ status in ACI’s Airport Carbon Accreditation programme, currently account for 5.3% of air passenger traffic in the Asia-Pacific region.

At the other end of the scale, 14 airports in six countries and territories (Australia, Cambodia, China, Fiji, New Caledonia and Oman) have achieved Level 1 ‘Mapping’ status in the Airport Carbon Accreditation programme.

The airports, which handle around 4.6% of all passengers across the Asia-Pacific region, are made up of Melbourne, Gold Coast, Hobart, Longreach, Mount Isa and Perth in Australia; Phnom Penh, Siem Reap and Sihanoukville in Cambodia; Haikou Meilan and Shenzhen Bao’an in China; Nadi in Fiji; Nouméa-La Tontouta in New Caledonia and Salalah in Oman.

A total of 13 airports from eight countries  and territories (Australia, China, Chinese Taipei, Japan, Malaysia, New Zealand, Oman and the UAE) across the region have achieved Level 2 ‘Reduction’ status.

The gateways, which handle 12% of all passengers across the region, comprise Townsville in Australia; Beijing Capital, Macau and Taipei Taoyuan in Chinese Taipei; Osaka and Tokyo-Narita in Japan; Kuala Lumpur in Malaysia; Christchurch in New Zealand; Muscat in Oman; and Abu Dhabi, Dubai International and Dubai World Central in the UAE.

Qatar’s gateway to the world says that its airport-wide energy reduction programmes and collaborative approach with airport stakeholders to manage third-party emissions have “resulted in measurable change”.

The accreditation acknowledges HIA’s commitment to tackling climate change and its target to improve carbon efficiency per passenger by 30% by 2030 against a 2015 baseline.

Sunshine Coast’s CEO, Peter Pallot, reminds APA that his gateway was one of the very first Australian airports to join the Airport Carbon Accreditation programme in 2012, and notes that adopting an innovative and holistic approach to reducing its carbon footprint allowed it to achieve carbon neutrality status in March 2017.

“We have worked hard to make Sunshine Coast Airport the most sustainable airport in the country and we are incredibly proud of our achievements under the programme,” enthuses Pallot.

SGK Kishore, CEO of operator, GMR Hyderabad International Airport Ltd (GHIAL), states that his gateway’s significant green achievements are the result of the operator’s “sustained efforts towards the environment”.

“These efforts include proactive energy conservation measures, generation of renewable energy (solar), carbon sinking through extensive greenbelt and various other environment protection measures, with the active support of the airport’s stakeholders,” he enthuses.

Other airports to be recognised for their efforts in the ACI Asia-Pacific Green Airports Recognition 2018 include Hong Kong, Mumbai-Chhatrapti Shivaji and Delhi-Indira Gandhi, which won Platinum, Gold and Silver awards respectively in the Over 35mppa category.

Auckland, Abu Dhabi and Kansai won the same respective awards for the 15 to 35mppa category; while Adelaide (Platinum) and Christchurch (Silver) joined Hyderabad in tasting success in the under 15mppa category. 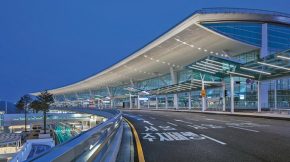