Sustainability and the environment are a top priority at Saudi Arabia’s Red Sea airport project where daa International has been awarded the contract to operate the new airport on completion, writes Curtis Grad.

An entirely different class of airport is being built on the remote Red Sea coast of Saudi Arabia, one that will be fully dedicated to an ultra-luxury resort – now under construction.

The exclusive gateway is situated on the doorstep of more than 90-plus pristine islands, 75% of which will remain undeveloped, while nine have been designated as areas of special conservation interest.

Led by The Red Sea Development Company (TRSDC), this ambitious $237 million greenfield airport development in Umluj includes an initial phase with 3,000 hotel rooms, recreational facilities and residential properties being built to serve its first guests on completion of the new airport.

The destination will be powered with 100% renewable energy at all times, generated by solar and wind. The largest battery storage facility in the world will guarantee supply at night.

VIP vacationers can expect no less than a private sanctuary, full of indulgent experiences, tailored for each visitor. All of that will begin at the airport, so the customer experience will have to be above and beyond anything seen at a typical gateway.

TRSDC is a closed joint-stock company wholly owned by the Public Investment Fund of Saudi Arabia, with assets of $430 billion at the time of writing. It has awarded daa International, a subsidiary of Irish airport operator daa, the contract to operate the new Red Sea International Airport (RSIA).

Daa, of course, runs Ireland’s Dublin and Cork airports and together with another subsidiary, travel retailer Aer Rianta International (ARI), ensures that the daa Group has extensive global experience, including in the Middle East.

At Saudi Arabia’s King Khalid International Airport in Riyadh, for example, daa International has run Terminal 5 on behalf of Riyadh Airports Company since it was opened in May 2016. A record 26 million passengers passed through the airport in 2019.

According to daa International, it has developed a “customised, passenger-centric operating model for T5”. It also manages the car parks and works with Riyadh Airports Company on route development and sustainability.

Undoubtedly, these factors were important in choosing daa International for the Rea Sea project where customisation, passenger focus as well as route marketing and environmental considerations are all top priorities.

The new airport will ultimately serve about one million passengers annually – a self-imposed limit based on the “environmental carrying capacity of the resort”. The airport peak capacity will be 900 passengers per hour.

In total, daa International will manage operations during three different stages of RSIA’s development. In Stage 1, it is tasked with ensuring that all airport designs benefit the customer. Stage 2 involves planning a full and seamless operational model when the airport opens to the public.

Stage 3 will focus on managing and operating this plan to the highest standards in customer experience and sustainability in place. 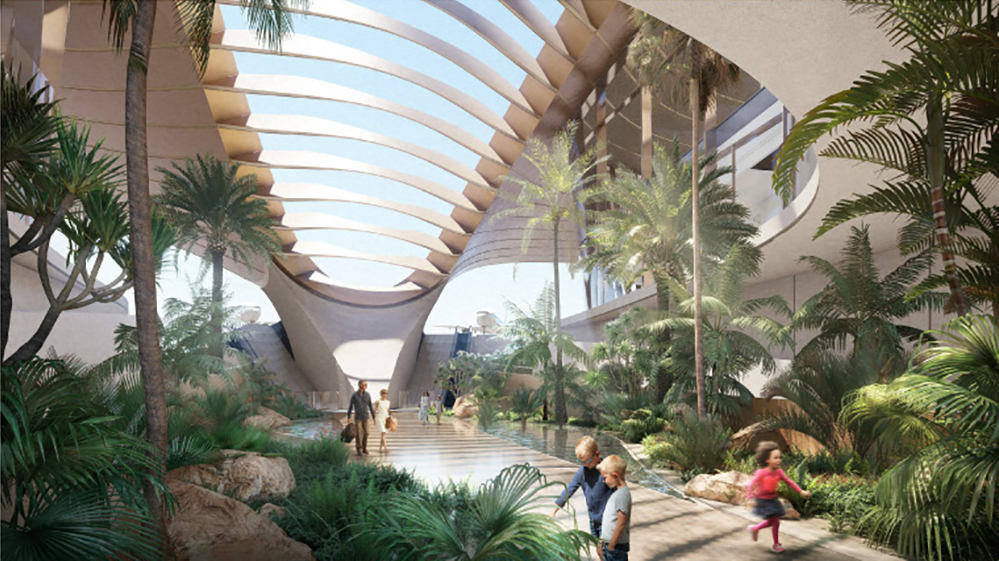 The current construction phase is being led by Saudi Arabia’s Almabani General Contractors working alongside Nesma & Partners. At the time of writing, 35% of the asphalt runway works, around 50% of more than 16 kilkometres of storm water channels and 64% of the aeronautical ground lighting (AGL) secondary ducts required by the airport have been competed.

According to TRSDC, this means that 48% of the overall airport construction is complete. Excavation and installation of AGL ducts and the formation of the primary apron and circular taxiway around the yet-to-be-built terminal building are in progress.

In a September 21st interview with radio station Dubai Eye, Group CEO of TRSDC, John Pagano, said: “Red Sea will open its first resorts – probably three – at the end of next year and then a further 13 by the end of 2023. At least six hotel brand partners are set to be announced
in the coming weeks.”

Like other Gulf airports, RSIA is at the crossroads of Europe, Asia and Africa with more than 250 million people living within three hours flying time. With 360 days of sunshine, averaging 32 degrees in summer, it is envisaged that the Red Sea Project will be a year-round destination for an elite group of travellers.

Pagano said he expects to see a customer split at the resort that is 50% international and 50% domestic/regional, brought in on a mix of scheduled and charter aircraft, as well as some private jets. “The main international source markets will be Western Europe, Russia, Asia, China and less so the US,” he noted.

Travellers will get their first vacation experience at the airport where Foster + Partners is well advanced with the terminal concept, designed “to bring back a sense of luxury into the arrival and departure experience”, according to senior partner, Toby Blunt.

Partner at the architecture firm, Matthew Hayhurst, states: “The brief was to create something that nobody’s ever seen before; that stands out and defines the Red Sea experience architecturally.”

Foster + Partners has come up with a semi-circular terminal divided into five canopied sections reminiscent of undulating sand dunes. Planes can park directly under each cantilevered canopy creating a ‘wow factor’ for viewers inside the terminal.

Hayhurst notes that smart technology will be used to create a luxury experience, part of which will extend to a one-minute arriving and departing process.

“Arrivals will go to a welcome centre to be escorted to their destination,” said Pagano. While Blunt noted that “departing passengers will almost feel like they are still at the resort until they get on that plane”.

For its part, daa International will soon be providing airfield and terminal operations, aviation services and facilities management as well as overseeing all commercial activities.

Nick Cole, CEO of daa International, said: “We’re working through the finer details but, in total, the new airport is likely to provide employment for several hundred staff.” 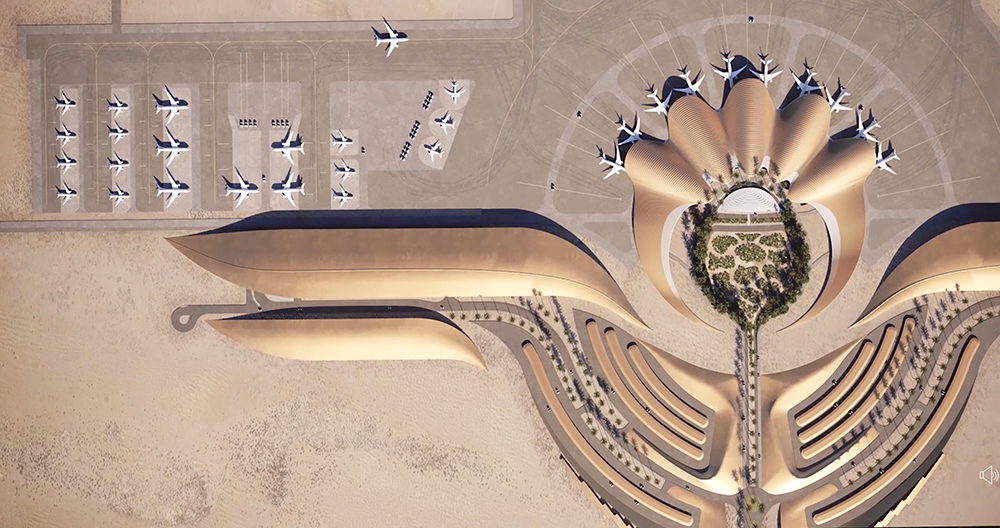 In line with the Foster + Partners vision, Cole expects the passenger experience to be very different from a typical airport.

“It will be an ultra-high-end product, driven by both the design of the terminal and by the way services are delivered to passengers,” he reveals. “Given that all guests will be staying at the destination, checked-in baggage can be dealt with seamlessly on arrival and departure. You won’t see passengers hauling large bags through the airport, whether arriving or departing.”

Within the terminal, five separate departure suites are being designed as a series of pods, each one offering facilities such as spas and restaurants.

On the all-important sustainability front, daa International has outlined some of its plans. “We will be encouraging airline customers to use the newest, most energy-efficient aircraft and also be working with them in relation to the introduction of sustainable aviation fuels and electric-engineered aircraft,” says Cole.

All ground operations will be powered by 100% renewable energy from TRSDC’s campus, adds Cole, while single-use plastics will be banned.

As part of TRSDC’s larger regenerative tourism initiative, RSIA may well set new standards in airport sustainability practices, while also offering the most luxurious, customised service at any gateway in the world.

Previous Article
VIEW FROM THE TOP
Next Article
Transforming KIX 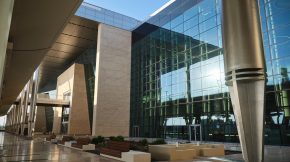 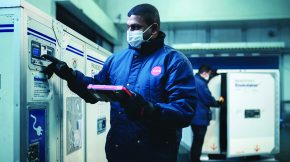 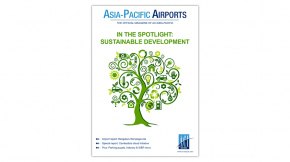 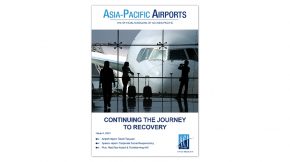 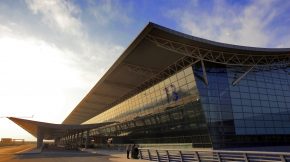