The recent addition of Kobe to its Japanese airport network means that Kansai Airports now operates three of the country’s busiest gateways.

Arguably, the jewel in the crown is Osaka’s Kansai International Airport (KIX), which handled 27.9 million passengers (+10%) in 2017 to cement its status as Japan’s third biggest gateway after Tokyo’s Haneda and Narita airports.

The long-term goal is to eventually operate all three gateways as one airport system in a bid to meet rising passenger demand across the region.

In terms of the privatisation of its airports, Japan is a relative newcomer to the stage, so the world was watching back in November 2015 when Kansai Airports agreed to pay $18 billion deal for the 44 year concession to operate and develop KIX and ITM.

The consortium – spearhead by global airport operator VINCI Airports and Japanese financial firm ORIX Corporation – was certainly entering new territory when the concession began on April 1, 2016, as the Japanese government had never before handed over control of one of its existing airports to the private sector.

How would the airlines respond to the change in dynamics? Was the fee too high considering the work that needed to be done in terms of infrastructure enhancements to ITM?

And what could the new concessionaire, Kansai Airports, do that the government couldn’t to stimulate traffic growth in a mature aviation market with an aging population and where new infrastructure costs come at a premium?

The April 1 addition of Kobe Airport probably tells you all you need to know about the success to date of the Osaka airports concession.

“The concession fee was never an issue because building KIX on a man-made island 40 kilometres south of Osaka was a huge operation and the government always wanted to recover its investment,” says Kansai Airports’ Co-CEO, Emmanuel Menanteau.

“How have the airlines responded to the change of owners? All of them have been very positive because they have seen that we are committed to developing the airports and have introduced a new pricing structure that is designed to stimulate traffic growth.

“What do we bring to the table as a private operator? “We bring investment and international best practice and skills in operating airports.

“We are quite unique in our business model in that we invest in, design and operate airports with the aim of enhancing capacity.”

Talking about how the first two years of the five decade long concession have gone, he adds: “I would say we have done well and look forward to doing even better over the coming years.

“Traffic is up at both airports since we took over the concession. We have also been quite successful in expanding Kansai’s route network, overseen the expansion of Terminal 2 at KIX and are now looking to complete the enhancement of the facilities at ITM.”

He also reveals that the company has introduced a number of new technologies and processes to the Japanese market such as Smart Security, Fast Travel and ‘Smart Lanes’, which he believes have “changed some of the rules of the game with airlines and some stakeholders”.

The appeal of Japan

To those that thought that there was little to no future growth left in the Japanese market, think again, and Menanteau has little hesitation in stating that there is much more to come.

His confidence is, in part, boosted by the fact that Japan has only embraced the low-cost carrier phenomenon in the last few years and, as KIX and ITM have proved since Kansai Airports took over the concession, route development will follow if airlines are offered the right incentive schemes.

“We [VINCI Airports] never had any doubt about the appeal of the Japanese market and, with our experience in construction and operating airports, and with the support of our Japanese partner, ORIX, we feel that we can grow the business,” says Menanteau.

“In many ways it is a typical VINCI Airports concession, in that it requires a high demand in capital, but is a long-term investment with expected good returns.”

VINCI and ORIX each have a 40% stake in Kansai Airports with the remaining 20% of the shares owned by local investors.

He says that giving investors and bankers “good visibility” about the long-term objectives of airport concessions usually helps secure the backing required for construction intensive projects, which he reveals generally offer a quicker, but smaller, return on investments.

“Although Japan is a mature aviation market and traffic growth has been quite flat, in recent years the government has made a big push to promote tourism and this has had a positive impact on visitor numbers, particularly from China, Korea, Taiwan and Hong Kong,” says Menanteau.

“The campaign has actually exceeded its targets for the last two years, and this shouldn’t come as a surprise really as Japan has a great product. Tourists have a great desire and willingness to visit the country, and I am pleased to say that today, KIX is the number one airport in Japan for Chinese and Korean visitors.”

He notes that the government fell just short of achieving its target of attracting 20 million international visitors annually to Japan by 2015 and is now aiming for 40 million by 2020, when Tokyo hosts the Olympic Games, and 60 million by 2030.

And with a record 30 million people visiting Japan in 2017, it is arguably ahead of the game in its 2020 target.

In terms of traffic growth at its airports, rising tourist numbers and the continued growth of the low-cost carriers in the domestic market helped make 2017 a record year for passenger traffic at Osaka’s airports.

And the good news has continued this year for KIX with traffic up 12.2% to 7.5 million passengers in the first quarter of 2018, with throughput at ITM rising by 2.2% to 3.7 million.

The introduction of a new pricing structure for the airlines, which includes reduced landing and parking fees for carrier’s launching new routes, certainly seems to have made an impact at KIX where AirAsia X and Scoot both commenced non-stop services to Honolulu last year and Qantas resumed flights to Sydney in December after a 10-year absence.

Menanteau is quick to point out that KIX boasts more direct routes to China today than either Tokyo’s Narita or Haneda airports, and is actively working to add more, along with new services to South East Asia, which is a key focus area for the airport.

He suggests that narrow-body aircraft such as the A320neo and B737 Max now make it possible to serve a number of new destinations in South East Asia from KIX and is keen to explore the options with different airlines.

Menanteau reveals that LCCs, led by Peach, now account for 42% of all passengers at KIX.

Talking about the rise of the LCCs in Japan, which first entered the market in 2012 and now account for 10% of the world’s third largest domestic market, Menanteau says: “For a number of reasons Japan got its first LCCs much later than most other countries in Asia, and they are quickly making up for lost time.

“They have made it easier and more affordable to fly domestically. They are cheaper to use than the high-speed trains and have really changed the way people travel within Japan.

“We have also seen the introduction into the market of non-Japanese LCCs such as AirAsia X and Scoot which are developing Japan as a hub for international traffic.”

Other LCCs serving the Japanese domestic market from KIX include Jetstar Japan and All Nippon Airways subsidiary, Vanilla Air, which is quickly evolving into a medium to long-haul operator.

More visitors/people inevitably means a country needs to upgrade its infrastructure to cope with demand, and Japan is no different. The country is fast building new hotels, developing its road and rail networks and enhancing facilities at tourist sites to ensure that it is equipped to cope with long-term growth.

The January 2017 opening of the expanded Terminal 2 at Kansai Airport means KIX currently has the capacity to accommodate predicted growth for the foreseeable future, but Menanteau states that improvements still need to be made to Terminal 1 to make it more operationally efficient.

“We are currently in the study phase for the reconfiguration and renovation of Terminal 1 as the high growth in international traffic since 2010, while its domestic numbers have remained relatively static, has created some capacity issues as the facility was designed for an equal split between international and domestic operations,” admits Menanteau.

“The imbalance in growth levels means that the international part of the terminal is always busy and congested and the domestic terminal sometimes looks empty.

“Re-organising the terminal will allow us to reset the balance because at the moment we are tight for space for international operations and have capacity on the domestic side.”

Terminal 1 handled around 22 million passengers in 2017 with international operations accounting for the bulk of the operations and 85% of all traffic at KIX.

These include the first walk-through duty free area in Japan, Smart Security lanes, reconfigured and easier to use drop off and pick up zones, additional bus stops and car parking for up 1,600 vehicles.

Menanteau says: “It may be a low-cost terminal, but it is definitely not a no frills facility in terms of its facilities.”

Kansai Airports is also overseeing ITM’s first major upgrade in nearly 50 years, investing much more than required under the terms of the concession to create a more efficient and user-friendly terminal.

“In terms of innovation and facilitation, we are going to create a real Fast Travel experience with Smart Security in order to ensure quick and easy passage through the terminal,” he enthuses.

“Why are we doing this? Because we feel that ITM faces direct competition from the Shinkansen high-speed trains, especially on the Osaka–Tokyo route, where it takes up to 85% of the traffic. If we are to tempt people to change their travelling habits and go by train, getting stuck at security for half an hour doesn’t work.

“We are also going to increase the range and variety of commercial offerings in the terminal. The new additions will include a walk-through shopping mall after security and a revitalised landside that we hope will appeal to local people and encourage them to visit the airport to shop, dine and be entertained.

“New landside facilities will include a kids’ park, a business zone, an expanded third-floor terrace and new shops and restaurants, some of which will offer high quality dining. Sense of place reflecting the Osaka region will be central to everything.”

Tags:
Previous Article
BACK TO THE FUTURE
Next Article
BETTER BY DESIGN 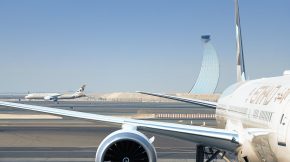 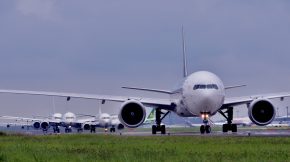