The clock is running down to the opening of Delhi’s new Noida International Airport (NIA) after the foundation stone for the new gateway was put in place in the presence of Indian Prime Minister, Narendra Modi.

In the picture above, NIA CEO, Christoph Schnellmann, and Daniel Bircher, chairman and managing director of operator, Yamuna International Airport Pvt Ltd (YIAPL), tell Modi and the chief minister of Uttar Pradesh more about the innovative generation project for the National Capital Region.

Schnellmann is confident that India’s next greenfield airport will provide passengers, airlines, and partners with quick, efficient processes and exceptional value.

He said: “The strong recovery in the aviation sector along with the government initatives to develop and expand airports will not only help meet the growing demand for travel, but also encourage higher connectivity between tier 2 and 3 cities in the country.

“Noida International Airport will connect western Uttar Pradesh to other cities in India and the world. This world class airport will set a benchmark in aviation infrastructure and development and the development of multi-airport systems in India.”

Bircher, who is also managing director of Zurich Airport International which 100% owns YIAPL, noted: “The ground-breaking ceremony is a key milestone, and the airport will act as a growth catalyst for not just the state, but the country.

“As the Ministry of Civil Aviation turns its focus towards making India a global aviation maintenance hub, NIA will aid the development of cargo and Maintenance, Repair, Overhaul (MRO) in the region, making flying more affordable.

“We are a committed partner for India’s growth, and we see tremendous opportunity to invest and support India’s national agenda through infrastructural development and job creation.”

Located around 72 kilometres from Delhi’s Indira Gandhi International Airport and 40km from Noida, the airport is expected to become India’s first net zero emissions airport when it opens in 2024.

Delhi Noida is initially expected to handle around 12 million passengers per annum before being expanded to accommodate 30mppa and 70mppa by the end of the concession in 2061.

New Gwadar International Airport (NGIA), a $246 million greenfield gateway being built on a 4,300 acre site in Gwadar, Pakistan, could open in late 2023, if the latest press reports are accurate.

A widely reported official source is being quoted as stating that construction work on the terminal building will be completed by June 2023, paving the way for the airport to open to passengers a few months later.

The airport is being developed as a joint venture between Pakistan, China and Oman and will be managed and operated by Pakistan’s Civil Aviation Authority.

The project is a key part of the China-Pakistan Economic Corridor (CPEC) development, which is a cornerstone of China’s One Belt One Road (OBOR) initiative. 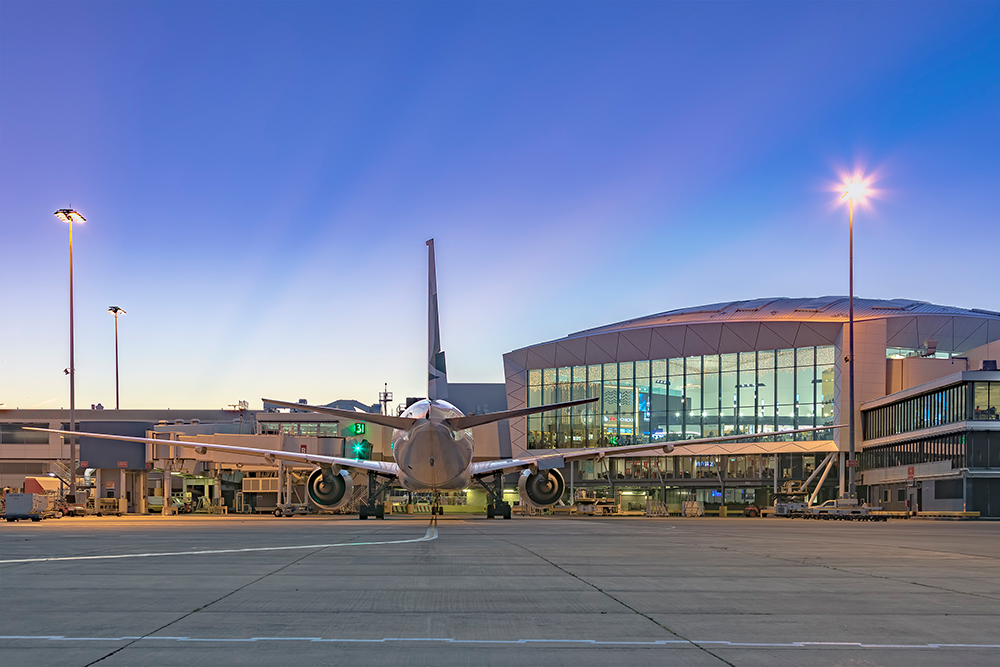 SYDNEY AIRPORT TO BE SOLD TO INFRASTRUCTURE INVESTMENT GROUP

Sydney Airport is set to be sold for a colossal A$23.6 billion ($17.5 billion) after the board unanimously voted to accept an offer from an infrastructure investment group.

GIP is certainly well known to the aviation industry having previously held a 50.01% stake in London Gatwick Airport in the UK, which it sold to VINCI Airports for £2.9 billion in 2019 – and it also previously owned London City Airport.

IFM holds a stake in Melbourne, Brisbane, Perth and Adelaide airports while QSuper has shares in London Heathrow in the UK.

The airport rejected an earlier bid from SAA for “failing to meet its valuation”, even going as far as to label it “opportunistic in light of the COVID pandemic”.

However, it admitted at the time that it was prepared to hold discussions and consider higher bids with potential suitors, and now feels that its valuation has been met.

The deal is conditional on an independent expert’s report, approval from 75% of the airport operator’s shareholders and a green light from competition regulators and the Foreign Investment Review Board.

A statement issued by IFM Investors chief executive David Neal on behalf of the SAA consortium said: “We look forward to securityholders voting on the proposed deal.

“Our alliance represents many millions of Australians, and we intend to work hard to bring more flights and passengers back to the airport as the aviation industry emerges from COVID-19.”

Egis’ joy at securing its first Asia-Pacific airport concession at Papeete Faa’a Airport in French Polynesia was abruptly ended in November when the president of Tahiti’s adminisrative court annulled the contract.

The decision to cancel the concession came just two weeks after Egis Airport Operations outlined its vision of the future for the airport, which included investing $250 million on upgrading the gateway’s facilities over the next five years.

Modernising the terminal building and airfield were two of the major infrastructure development projects planned by Egis, which even went as far as preparing and issuing tenders for the projects.

In 2019, Faa’a was the only airport in French Polynesia to boast an international route network, with Papeete having direct connections to a number of cities in Australia, New Zealand, Japan and both North and South America.

The route network, which included services to Honolulu, Los Angeles, San Francisco and Vancouver, led to the airport handling a record 1.4 million passengers in 2019.

Egis confirmed to Asia-Pacific Airports that the concession contract had been cancelled by a judge but declined to comment further at this stage. 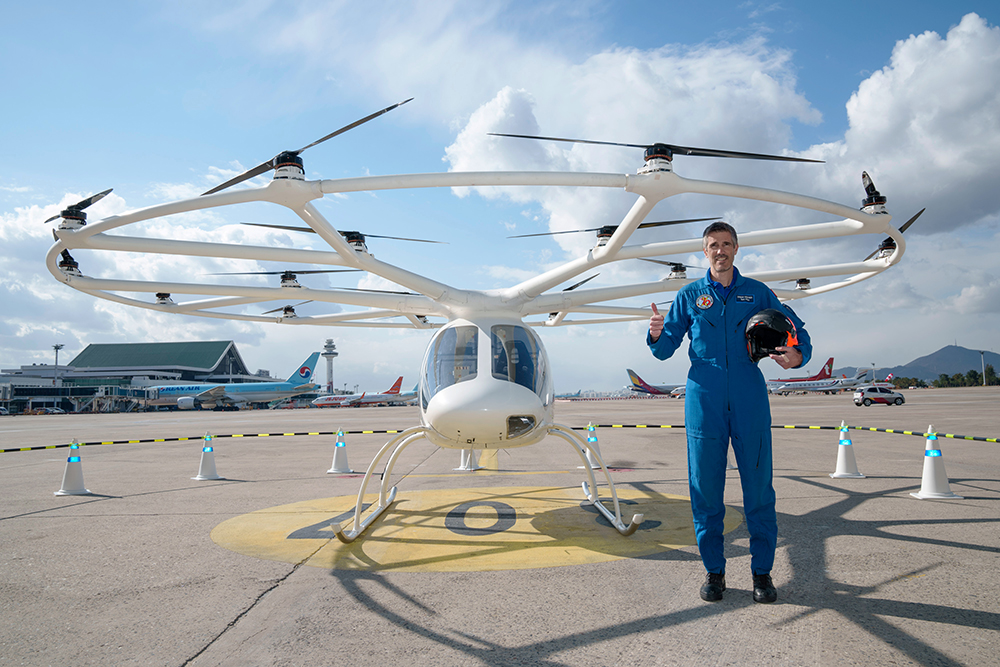 Volocopter has completed the first test flight of its 2X aircraft at Seoul’s Gimpo International Airport, potentially paving the way for the introduction of flying taxi services at the gateway from 2025.

It was the first ever crewed public test flight of a fully electric vertical take-off and landing (eVTOL) air taxi in South Korea and was witnessed by the country’s Minister for Land, Infrastructure and Transport, Noh Hyeong Ouk.

During the five-minute test flight at Gimpo the 2X aircraft (pictured above) covered approximately three kilometres and reached a maximum altitude of 50 metres and top speed of 45km/h.

The South Korean capital is the second city in Asia to host a Volocopter test flight, following in the footsteps of Singapore, which held a successful and much publicised trial in 2019 with a flight around its popular Marina Bay area.

The global air transport industry has adopted a long-term climate goal of net zero carbon emissions by 2050 with signatories to a joint declaration representing the world’s airlines, airports, air traffic management, and the makers of aircraft and engines.

In the declaration, representatives of the world’s major aviation industry associations, including ACI World, as well as the largest aircraft and engine manufacturers, committed that “global civil aviation operations will achieve net zero carbon emissions by 2050, supported by accelerated efficiency measures, energy transition and innovation across the aviation sector and in partnership with governments around the world.”

“ACI member airports, who committed in June 2021 to reaching net zero by 2050 for their own emissions, will be key players in facilitating this transition so the aviation system can continue to deliver economic and social benefits to the world. We look forward to collaborating with governments and the wider aviation community to help deliver these goals.”

Net zero will be reached through a combination of climate action initiatives. This includes supporting new aircraft technologies, such as hydrogen and electric, as well as improvements in operational efficiency and infrastructure.

The acceleration of the production and uptake of sustainable aviation fuel (SAF) is expected to play a major role in reducing the climate impact of aviation. Furthermore, any outstanding emissions would be captured using carbon removal measures.

“The road ahead will be challenging, but aviation is no stranger to challenges. This historic declaration shows the determination of the sector to work together to take this important climate action,” noted de Oliveira.

“It is now imperative that governments support these efforts to make this vital sector sustainable.

“This makes it all the more urgent that member states of the International Civil Aviation Organization support the adoption of a long-term climate goal at the 41st ICAO Assembly in 2022.”