Despite today’s tough operating environment, the number of airports in the Asia-Pacific region continues to grow with the recent opening of the new Mukah Airport (MKM) in Sarawak, Malaysia, and Chengdu Tianfu International Airport (TFU) in China.

Mukah’s new $70 million gateway replaces the town’s former short take-off and landing (STOLport) airport, which opened in the 1960s and could only handle a maximum of 67 passengers at a time.

Today’s 3,120sqm terminal can accommodate up to 264,000 passengers per annum while its 1.5 kilometre long runway is initially equipped to handle turboprop and helicopter operations.

Operator, Malaysia Airports, notes that the runway could eventually be extended to allow it to welcome larger aircraft such as the Boeing 737 and Airbus A320.

Malaysia Airports’ CEO, Dato’ Mohd Shukrie Mohd Salleh, enthuses: “The opening of the new MKM will help to further boost the connectivity of the coastal town and its surrounding areas in Sarawak. MKM can now serve more people and strengthen the town’s prospects in contributing to the local economic development.”

Meanwhile, in China, the $11 billion Chengdu Tianfu International Airport in Sichuan Province (pictured above), opened for business in late June and perhaps fittingly, Sichuan Airlines operated the first ever departure from the gateway, flight 3U8001 to Beijing.

Located in Jianyang district, approximately 50km east of downtown Chengdu, TFU is expected to play an important role in the economic development of Sichuan Province and its 80 million inhabitants.

The new greenfield airport has two terminal buildings and three runways that will initially allow it to handle around 40 million passengers per year, although with future expansion that capacity could ultimately rise to around 90mppa.

Groupe ADP’s deputy executive officer for development operations, Xavier Hürstel, comments: “The new Tianfu International Airport is a fine example of the expertise developed by Groupe ADP in large scale airport design, which is part of our DNA as an airport operator and comes from decades of experience gained in Paris and through our worldwide network.”

Singapore Changi has become the first airport in the Asia-Pacific region to successfully complete the Airport Health Measures Audit Programme.

The Airport Health Measures Audit Programme – developed in partnership with Bureau Veritas – supports airports by addressing their specific risks and reassuring passengers through an on-site audit of their health measures.

By successfully completing the audit, ACI World notes that Changi Airport has demonstrated compliance with a harmonised set of measures, aligned with the recommendations of national and international authorities, and can now display the associated SafeGuardTM label.

Changi also successfully renewed its accreditation under ACI World’s Health Accreditation programme, demonstrating that the health measures in place at the airport are aligned with industry best practices.

“By being the first airport in the Asia-Pacific region to successfully complete the Airport Health Measures Audit Programme, Changi Airport has shown they are committed to ensuring the health and safety of passengers, staff and the general public,” says ACI World director general, Luis Felipe de Oliveira.

ALL SYSTEMS GO FOR DELHI-NOIDA

Construction of Delhi’s new Noida International Airport is a step closer to reality following the closure of a $500 million loan from the State Bank of India to help finance the first phase development of the new gateway.

The airport will be built and operated by Yamuna International Airport Private Limited (YIAPL), a special purpose vehicle set up for the job and 100% owned by Zurich Airport International.

YIAPL CEO, Christoph Schnellmann, said: “The deal marks another crucial milestone for the project, bringing us closer to the start of construction.

“This sets an example for the industry, showing how we can work together to support recovery and bring back the sustainable social and economic benefits of aviation we deliver to the communities we serve.”

ACI World notes that the SafeGuard label addresses specific risks to all places where people live and work, providing a continuous reference to travellers along their journey.

It means, says ACI, that teams have been effectively trained on hygiene best practices and assures that protective measures are properly set up and implemented in a transparent way.

For this partnership with ACI, Bureau Veritas has developed a dedicated checklist to cover all the processes of an airport, from management to operations which is deployed through an on-site audit.

Health, safety and air transport experts all contributed to the creation of this airport-specific checklist.

Airports that successfully complete the process will be able to display the SafeGuard label to communicate this achievement to passengers, staff and the public on this dedicated website.

“We are pleased to confirm that over 1,300 of the 1,334 hectares of land required for the new airport has now been handed over to us. Our timeline is to deliver the airport three years after we have acquired all the land.

“So, we are planning to complete work on Phase I of the airport development by the end of 2024 with an investment of $766 million.”

Delhi Noida is initially expected to handle around 12 million passengers per annum before being expanded to accommodate 30mppa and eventually 70mppa by the end of the concession in 2061. 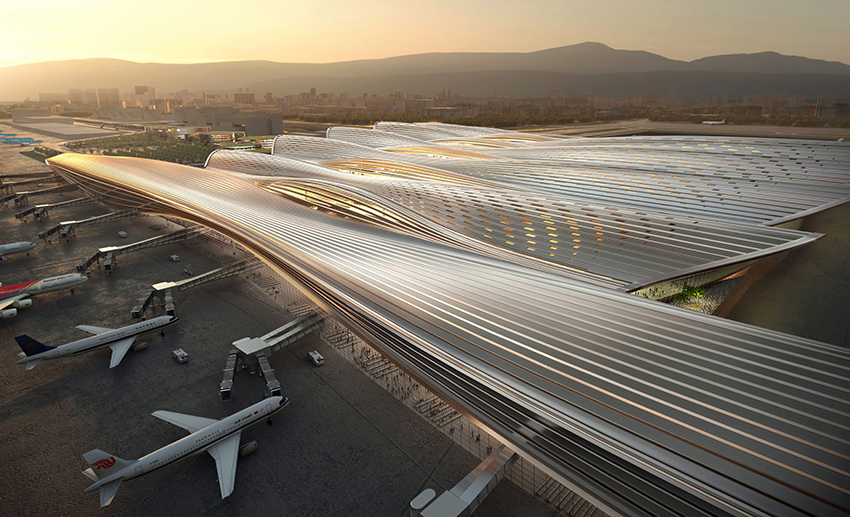 Shenzhen Bao’an International Airport in China has chosen the above design concept for its new 400,000sqm terminal, which will provide connections to existing and new transport infrastructure and be capable of handling up to 31 million passengers per annum.

At the heart of the concept is a 10,000sqm central garden space, the size of 40 tennis courts, which will act as “the frontdoor to Shenzhen”, and be connected to other parts of the airport through landscaped pedestrian routes.

“Our design for the new terminal supports Shenzhen’s goal of becoming a leading centre for new technologies and the aspiration to be the world’s greenest city.”

The first half of 2021 has been a busy one for Korea Airports Corporation (KAC), which has quietly gone about expanding in the international arena by undertaking a feasibility study for an airport development project in Laos and been awarded the concession to operate and develop Manta Airport in Ecuador.

While in Ecuador it has signed a 30-year concession to manage and grow Manta Airport, which will become KAC’s first directly operated international airport, as up until now it has only run 15 gateways in South Korea.

Manta is the largest port city in Ecuador, the self-proclaimed tuna capital of the world, and the nearest beach resort to the Galapagos Island, a UNESCO World Heritage site.

KAC CEO, Chang-wan Son, said: “This project is significant as Korea successfully paved the way into the global market for overseas airport operation, predominated by other leading airport operators.

“We will make continued efforts to enter into new global markets by promoting our expertise in airport operations and outstanding smart airport technologies to contribute to G2G co-operation and economic development.”

Passengers travelling with assistance animals at Perth Airport no longer have to worry about their pets having any little accidents or seeking a cool drink following the opening of animal relief areas in two (T1 and T4) of its four terminals.

The gateway’s chief commercial officer, Kate Holsgrove, enthuses: “We’re continually looking at opportunities to improve access for people travelling with a disability.” “The new facilities are part of our commitment to making our airport more accessible for all.

“The locations have been chosen to allow quick and easy access for passengers and their animals, particularly while waiting on baggage or following the check-in process.”

The gateway decided to open the new facilities on the advice of the Perth Airport Access and Inclusion Customer Reference Group.

The new APS features an automated robot that upon activation by a technician takes the shortest route to find and retrieve parts stored in any of 200 multi-compartment bins that it manages.

Chief executive, Wilson Kwong, notes: “The APS robot will immediately save more than 1,500 man-hours per annum, while a mobile app that enables technicians to order spare parts from any location will also be introduced in due course, further improving our efficiency.”

Hactl’s automated Container Storage System (CSS) has 11 levels, is 260 metres long and features a giant unit load device (ULD) racking system that holds 3,500 units and stores and retrieves up to 8,000 tonnes of air cargo per day.