Expansion on the horizon

With new owners and a capacity doubling new terminal on the way, the future looks bright for Kazakhstan’s Almaty Airport, writes Joe Bates.

Almaty Airport is under new ownership after a consortium led by global airport operator, TAV Airports, acquired the Kazakhstan gateway earlier this year.

The deal is expected to take Kazakhstan’s gateway to the world to the next level in terms of its facilities, growth potential and ambition to become the undisputed leading hub for Central Asia.

A record 6.4 million passengers (+13%) passed through Almaty in 2019 to cement its status as Kazakhstan’s busiest airport, the upward trajectory being helped in no small way by the growth of home-based flag carrier, Air Astana.

Indeed, Air Astana’s expanding route network and the addition of new international routes have made Almaty Airport (ALA) one of the region’s fastest growing gateways for the last decade.

The global pandemic has, of course, had an impact on traffic at Almaty Airport, which saw its passenger numbers drop to 3.6 million in 2020 due to a significant reduction in flights and travel restrictions as a result of COVID-19.

However, with traffic levels beginning to rise again, the need for new infrastructure to ensure that the airport is capable of meeting anticipated future demand remains very much front and central for ALA’s new owners, who have pledged to invest around $200 million on a new terminal.

Air Astana’s president and CEO, Peter Foster, certainly believes that TAV’s ownership of Almaty Airport and promise of future investment in new facilities can only be a good thing for the gateway, his airline and Kazakhstan.

“Air Astana welcomes the entry of TAV with whom we work with at several airports around our network, and we look forward to building a solid business relationship with them,” enthuses Foster.

A member of Groupe ADP, TAV now owns 85% of Almaty Airport and its associated fuel and catering businesses with the Kazakhstan Infrastructure Fund – managed by VPE Capital and backed by Kazyna Capital Management – holding the remaining 15% stake.

Almaty is the first airport in TAV’s portfolio where the company actually owns the airport instead of holding a time limited concession. So why has it decided to do things differently in Kazakhstan and break from the concession model that has proved hugely successful for it across the globe over the last 20 years? 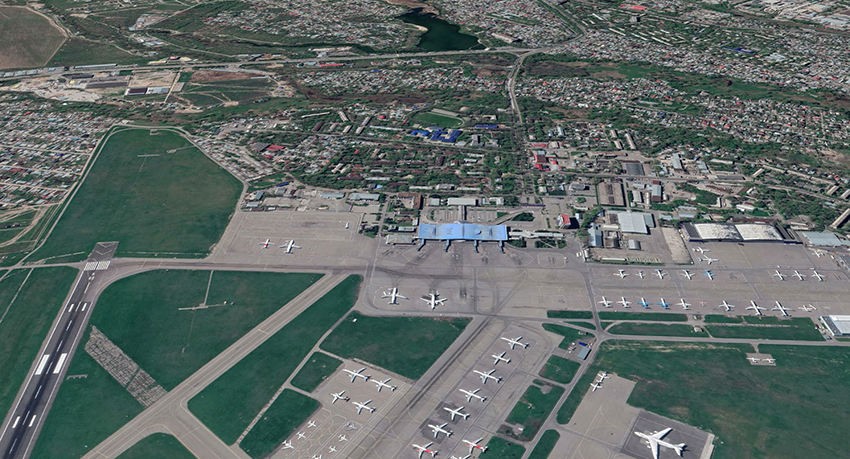 TAV Airports president and CEO Sani Şener, says: “Our strategy is to invest in projects that are in line with our financial capabilities and operational abilities.

“Traditionally, airports are strategic and long-term investments developed and managed by the public sector. In the last 30 years, the concession or public-private-partnership (PPP) model has proved to be an effective solution when the states wanted to direct resources elsewhere. Simultaneously, with the advent of globalisation, airport businesses evolved to provide a unique and complete experience.

“TAV was among the first around the world to undertake concessions, and with great success, creating value for the public, shareholders, lenders and other stakeholders. Yet, we have the capabilities to execute other investment models. The only condition is that it must be the right project for our financial and operational capabilities, and Almaty fulfilled these criteria. We are very much used to crisis, and never stop looking for new opportunities.

“So, Almaty has become the first fully-owned airport in our network. It enlarges our footprint to Central Asia, where we want to continue to grow. Our airport portfolio will allow us to develop Almaty’s route network, adding new destinations and bringing in new airlines to Almaty.”

The main gateway to Kazakhstan is an important junction in the modern ‘Silk Road’ and becomes the 15th airport in TAV’s global network.

TAV Airports notes that the previously agreed purchase price of $415 million was reduced to $365 million taking into account the traffic decrease of the last year due to the pandemic.

Depending on the recovery of the traffic to pre-pandemic levels, the consortium will pay the additional $50 million in the coming years.

As part of the deal, Turkey-headquartered TAV will invest around $200 million on building a new international terminal which will double the airport’s capacity to more than 14 million passengers annually. The investment is planned to be completed in less than three years.

TAV’s deal for ALA was supported by the International Finance Corporation (IFC) and the European Bank of Reconstruction and Development (EBRD), which financed 50% the acquisition and have agreed to fund 100% of the new terminal investment with a loan. The financing is expected to be closed in the third quarter of 2021.

The appeal of Almaty and Kazakhstan

Located in the south-east of the country, in addition to its importance to the Silk Road, Almaty is a strategic point along China’s ‘One Belt One Road’ project, connecting Central China to West Asia, Europe and Africa.

Almaty itself and the surrounding region is home to 3.5 million inhabitants – 20% of the country population. And Almaty city’s GDP per capita is the second highest among Kazakhstan’s regions, with only the resource rich Atyrau region achieving higher levels.

Şener enthuses: “Our strategy is focused on emerging markets, because this is where growth happens. Central Asia has great geostrategic importance in today’s global trade and Kazakhstan leads the region in economic growth and Foreign Direct Investment. 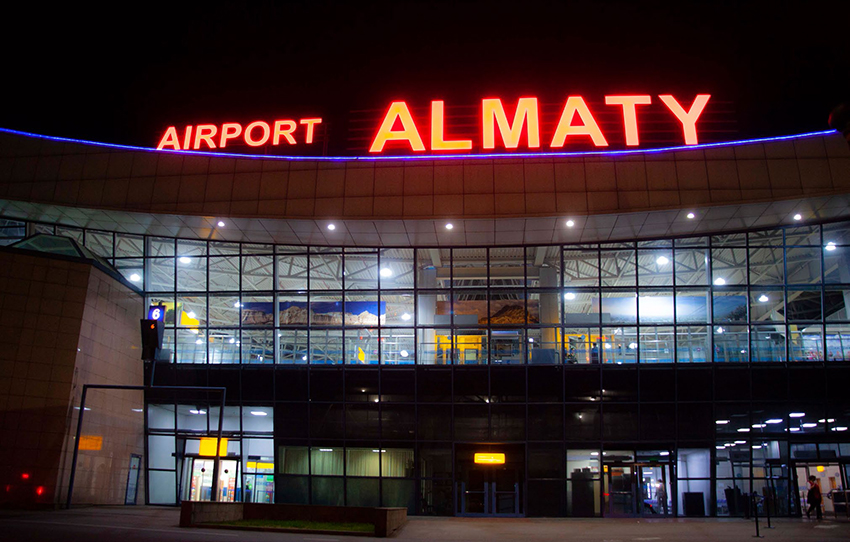 “Almaty is the financial and cultural capital of the country and therefore we believe there’s significant growth potential for the airport, and drawing upon our extensive know-how, we’ll work towards realising this potential to the fullest.

“As part of the largest airport management group globally, we’ll be promoting Almaty and Kazakhstan as the business capital of the region, as a country with a rich cultural heritage and diverse tourism opportunities.

“Our expertise in route development will help to increase the connectivity of Almaty to the world. As an example, in Georgia we doubled the number of destinations and increased passenger traffic seven-fold in a decade.”

He notes that TAV’s aim is to contribute to the economic and social development of Almaty region, creating employment and facilitating a global reach for local businesses.

“I would like to underline the supporting approach towards foreign investors in Kazakhstan and thank government officials, our partner, our lenders and employees who made this process as smooth as possible,” adds Şener.

Existing facilities and timeframe for development

ALA, which arguably counts Manas International Airport in Bishkek, Kyrgyzstan, as its biggest rival, currently boasts a single terminal and two runways that are capable of handling around seven million passengers per annum.

Although the terminal is fairly modern having only opened in 2004, its location, layout and design doesn’t allow much scope for any capacity enhancing development, so plans for a potential second terminal have been on the table for years.

In this regards, ALA has looked on enviously at Nursultan Nazarbayev International Airport (formerly Astana International Airport) in capital city, Nur-Sultan, which opened a new $200 million terminal in 2017 that has allowed it to operate with separate international and domestic terminals. It is a model that is likely to be repeated in Almaty in the next few years.

TAV Airports’ Şener promises that the planned new terminal will not only double ALA’s capacity to 14mppa but bring enhancements such as the latest, touchless self-service technology, new retail/F&B concepts and even an airport hotel.

Will TAV be looking to upgrade in the airport’s IT systems in the future, particularly in light of COVID-19 and the new appeal of touchless self-service technology?

“The pandemic has increased the pace of digitalisation at airports and I believe that this trend will continue. The aim is to provide a seamless, safe and comfortable travel experience to our passengers,” Şener replies.

“Our subsidiary, TAV Technologies, is already providing IT solutions in all areas of airport operations. Through the use of biometrics, AI and others, TAV Tech developed self-service, queue management and touchless applications. We’ll be employing this know-how in Almaty in due course.” 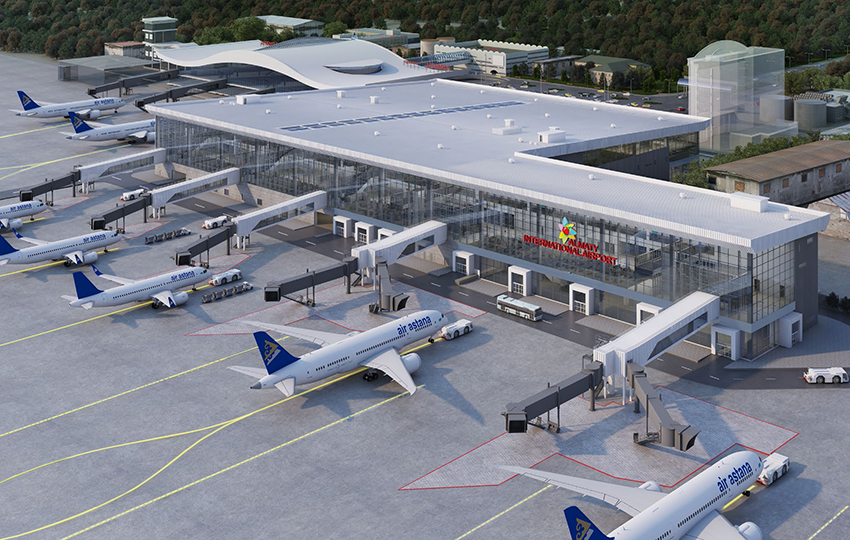 Kazakhstani national flag carrier, Air Astana, is the dominant airline in Almaty, accounting for around 55% of all passengers handled at the airport.

Air Astana is widely recognised for having one of the youngest fleets in the world, which as of May 2021, comprised 34 Airbus, Boeing and Embraer aircraft, the bulk of which are less than four years old.

Foster notes that Air Astana took the strategically significant step of launching FlyArystan as Central Asia’s first LCC in May 2019 and it has rapidly developed an extensive network of domestic services, together with international services to Georgia and Turkey.

Indeed, FlyArystan has carried three million passengers over the past two years and recorded average load factors of more than 87%, and an average on-time performance of 89%, despite the pandemic.

Talking about the impact of COVID on his airlines, Foster admits that’s Air Astana’s “spirit of innovation” has been tested during the health pandemic, with a significant number of long-established international services either suspended or heavily curtailed in terms of frequency. 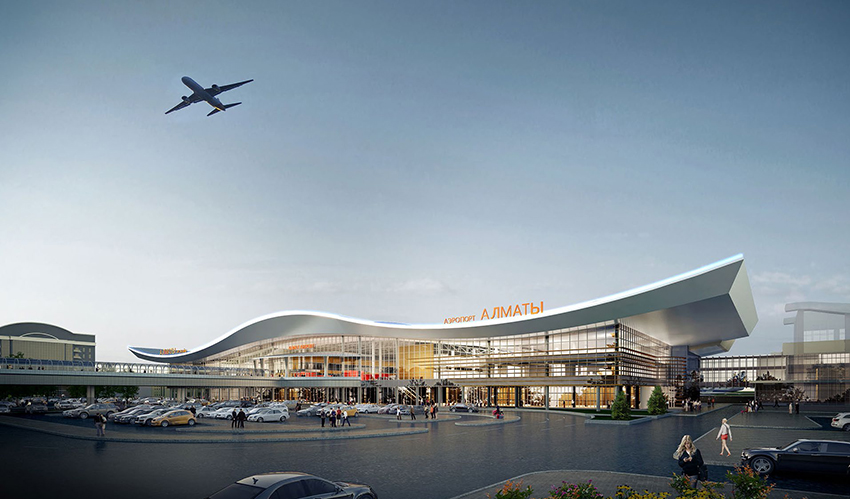 However, he is quick to note that Air Astana was “managing the crisis” and is in “good shape” today due to making some important strategic decisions. These, he says, included identifying new opportunities in different market segments, with the opening of new leisure services to destinations including Egypt and the Maldives, as well as new flights to Batumi and Kutaisi in Georgia.

“We have also pivoted from our traditional international model to one serving domestic leisure market demand,” reveals Foster. “This move has been successful and will be extended and supported by the launch of regular flights to Podgorica in Montenegro in June.”

In addition to Air Astana, Bek Air, Qazak Air and SCAT Airlines also use Almaty as their base, enjoying a market share of 6%, 3% and 14% respectively.

The other big players are Aeroflot (4%) and Turkish Airlines (3%) – the former being the biggest beneficiary of Transaero’s demise as it is now the second biggest international airline serving Kazakhstan due to its expansion on Russia-Kazakhstan routes in collaboration with low-cost subsidiary Pobeda Airlines.

In 2019, international passengers accounted for around 47% of traffic mix in Almaty, and this is something Şener would like to see increase in the future.

He says: “In 2019, the traffic mix was balanced, with around 53% domestic and 47% international. Our aim is to simultaneously increase the number of domestic and international passengers, but mainly the latter.

“Almaty has a rich cultural history and a number of scarcely known natural beauties. Besides its place as the financial and business hub of the region, we’ll work to promote Almaty as a leisure destination and attract international travellers from around the world.” 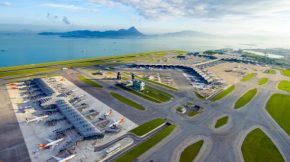 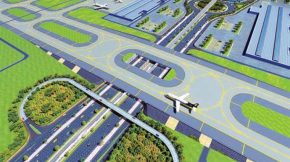