Developing a ‘security culture’ is about engaging all staff at all levels of an organisation to embrace common security-driven values and consider security as a priority in all of their work.

The aviation community puts much emphasis on the importance of a layered approach when it comes to security. Various measures are put in place, from screening and information sharing, through to staff background checks and perimeter fences.

But are we under-utilising one of the most valuable assets that an airport can have in terms of its security, namely its tight-knit community? Engendering a security culture within this community can effectively deliver hundreds of additional security resources, each of whom have a unique perspective on the operation.

This is not something theoretical or complex. There are straightforward steps that any airport, airline or organisation in the aviation supply chain can undertake that can deliver a new approach and a powerful security asset.

Perhaps the most emblematic layer of security is the checkpoint; much emphasis is placed on screening of passengers and baggage, staff and crew. However, with a new breed of threat from terrorists looking to attack softer targets, and the spread of radicalised individuals throughout society, perhaps a new approach to security is needed.

In the public areas of airports, where we have little insight into who is in the terminal building, screening is impractical and we rely heavily on surveillance and patrols. In the secure area of airports, there is greater control, since we know that people are either passengers or are authorised to be present.

Many of these people need to carry tools of the trade or goods for the airport or aircraft as they pass through checkpoints. Do we really know who every single one of these people is, and their intent?

Screening is, of course, very effective as a method of detection and deterrence for both people and vehicles, but it cannot address all possible scenarios and threats. An additional challenge is constantly keeping background checks up to date, and having a reliable source of information. Even then, there is little to say that a person has not become radicalised or is being influenced by an outside factor.

A comprehensive approach to security, therefore, relies heavily on people.

Fundamental to the successful implementation of such a culture is a genuine concern for security, and a desire to improve.

This has to come from the top-level management and permeate the entire organisation. A one-day security awareness training course will have no effect if staff see it simply as an additional task, or something that makes their job more difficult. Security, like safety, has to be at the forefront of everyone’s minds.

Secondly, there has to be a clear definition of everyone’s role in security, from the security manager, through screeners, to airport operational staff, retail staff and cleaners.

Thirdly, staff must be empowered to act. One of the key barriers to implementing a security culture is either an attitude of “not my job” or “nothing I can do about it.”

Staff must believe that they can make a difference, and that management will listen to them if they have something of concern to report or a suggestion for improvement.

Making it interesting, rewarding and fun

To raise the profile of security and ensure that all staff understand that it is of top priority to an organisation, internal ‘marketing’ or information campaigns can be run to keep security uppermost in people’s minds.

Training plays a key role. Employees need to be able to recognise suspicious behaviour by either passengers or other members of staff immediately, identify a suspicious object, and pick up on a security task or procedure that is not being completed correctly.

This may be basic training for all staff on suspicious behaviours and possible threats, but might also include more specialised behaviour analysis training for security personnel.

The ability to report a suspicious incident without fear of reprisal is also a critical element. Recognition on consistent performance should also be encouraged.

Where to from here?

First and foremost, security needs to be recognised as important and rewarding. Time and effort need to be invested in staff, recognising the role that every person in the airport environment can play in security and capitalising on the incredible opportunity that such a diverse workforce can bring.

The reach of security culture can even stretch to the travelling public – vigilance and willingness to report suspicious behaviour, potentially adds billions of people a year to the security workforce. It is a layer of security that could be used so much more. 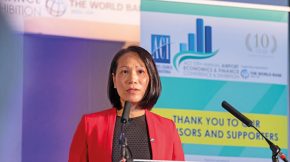